We just came back from a one week vacation to the Dominican Republic. Both of our batteries were exhausted and we needed a recharge urgently. The plan was to not do anything but sit in a hammock and watch the water. Because my partner needed to do some work during the week, which almost caused us not to book anything this year, we decided on an all-inclusive package. 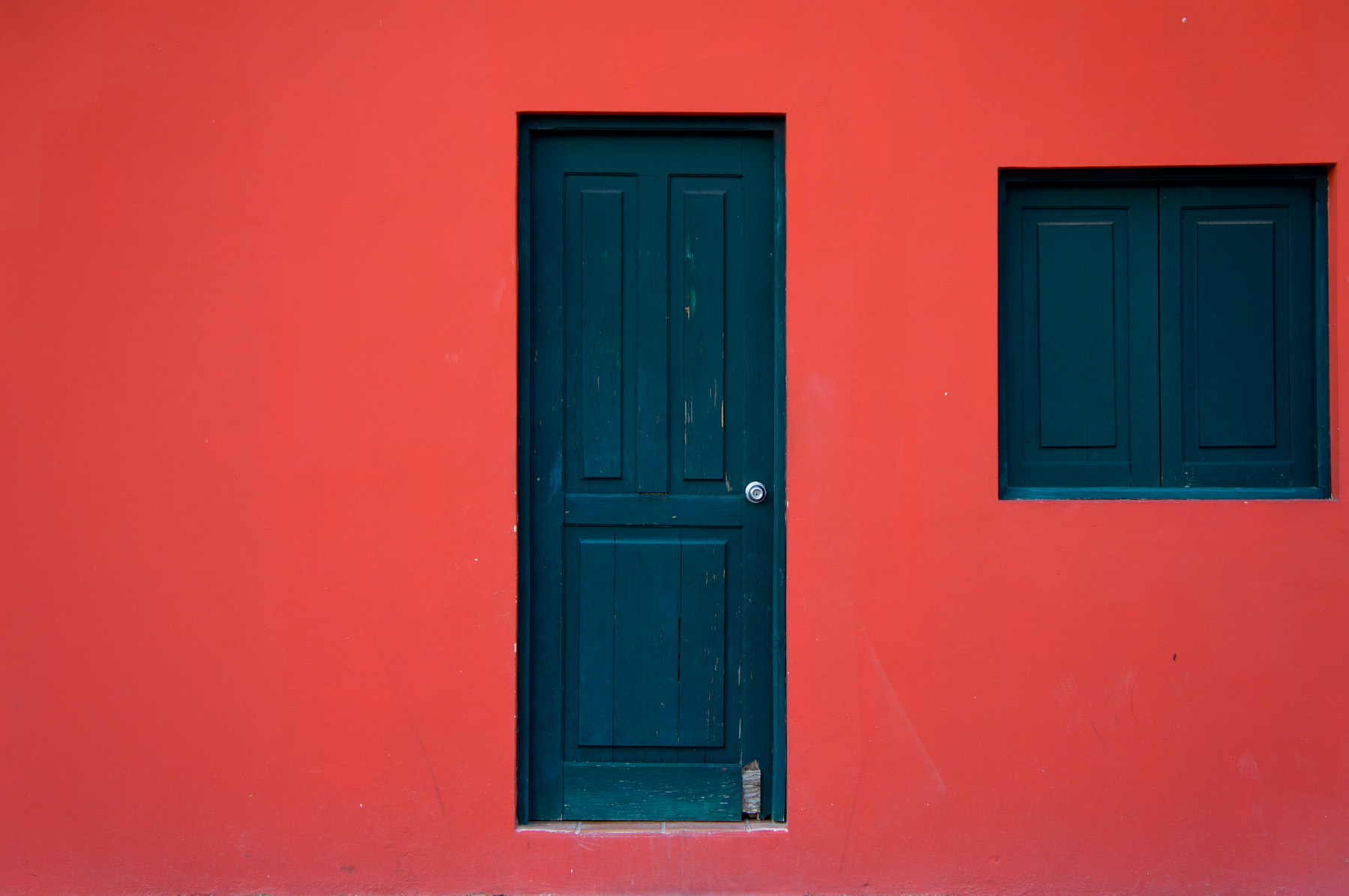 This would allow her to work in the morning, while I would put my head into the water, and to do activities together in the afternoon without thinking of cooking or driving. Just being lazy for a week was at least my master plan. I have to admit that this worked perfectly for a day until I got excited about various options. The resort itself was huge, not by rooms, but by shear size. Well kept landscapes, beautiful parks, lakes, pools, beaches, golf-courses ( I took three hours with a private trainer and it is more fun than I expected it to be), water sports, restaurants, etc. Everything is very green, beautiful, not overcrowded, and relaxing. I assume that most people there stay within the boundaries of the facility. My guess is that the property is about one mile long and half a mile wide. Every tree, every plant, every detail gets constantly maintained by an army of workers. 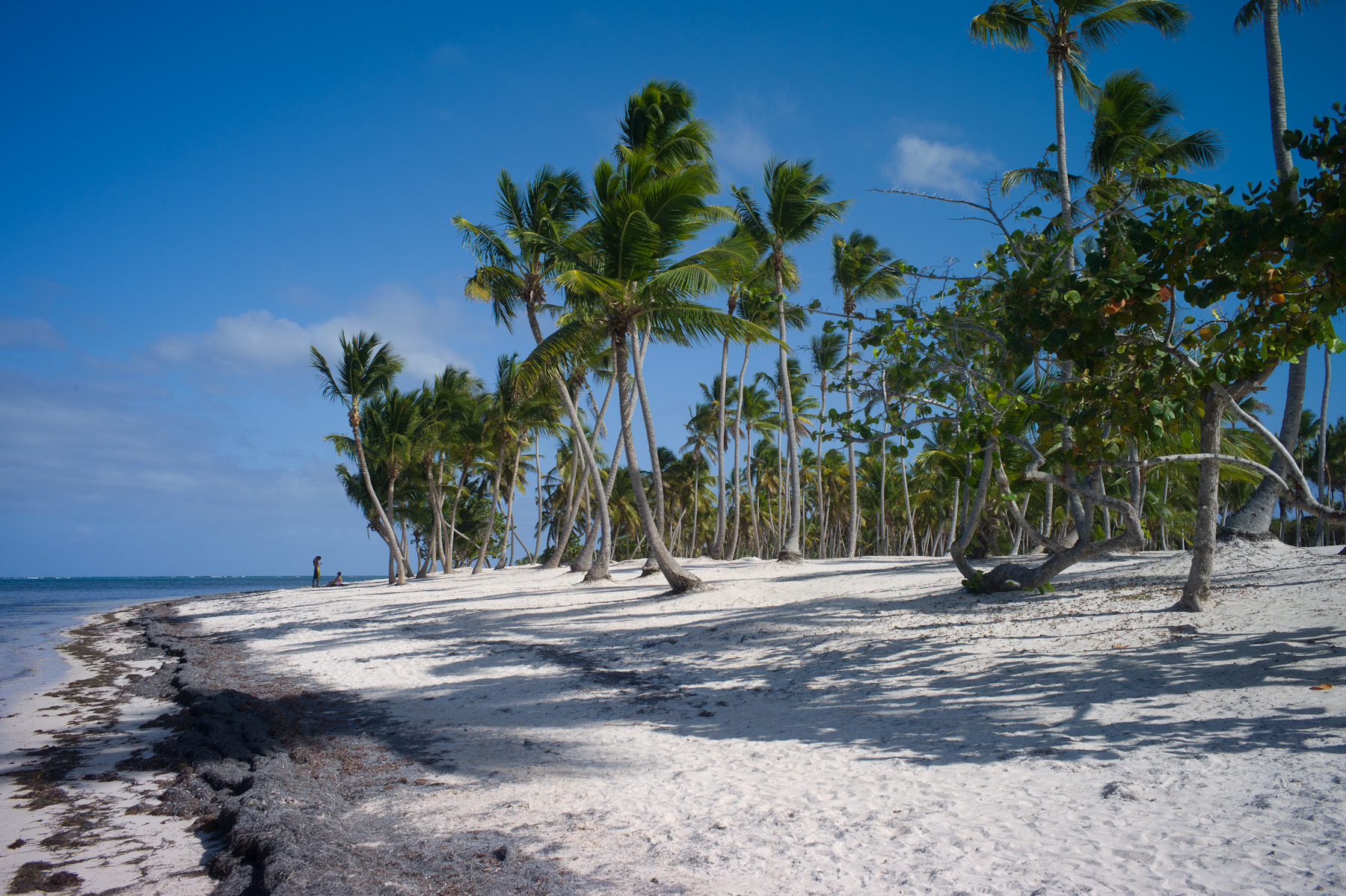 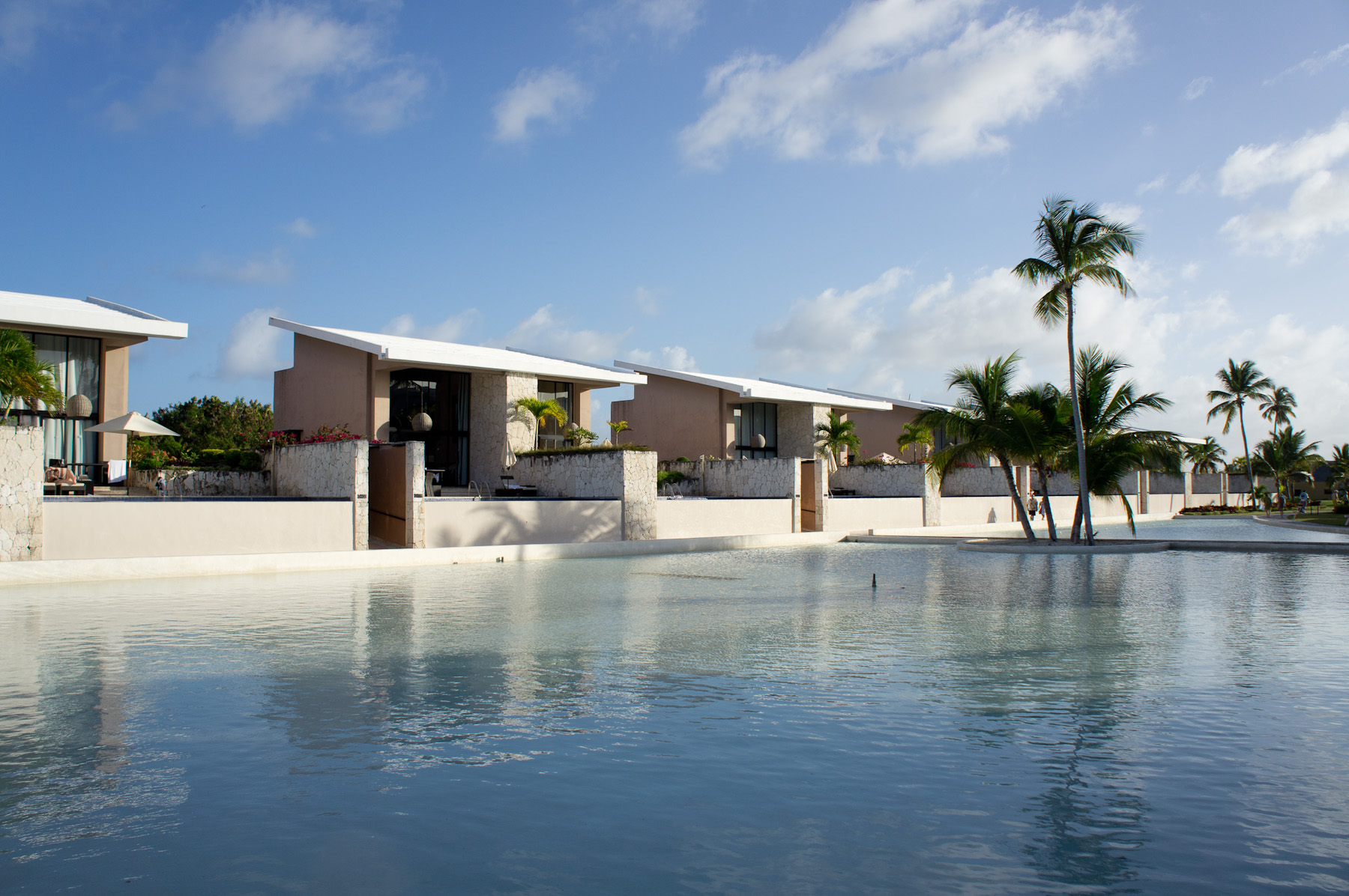 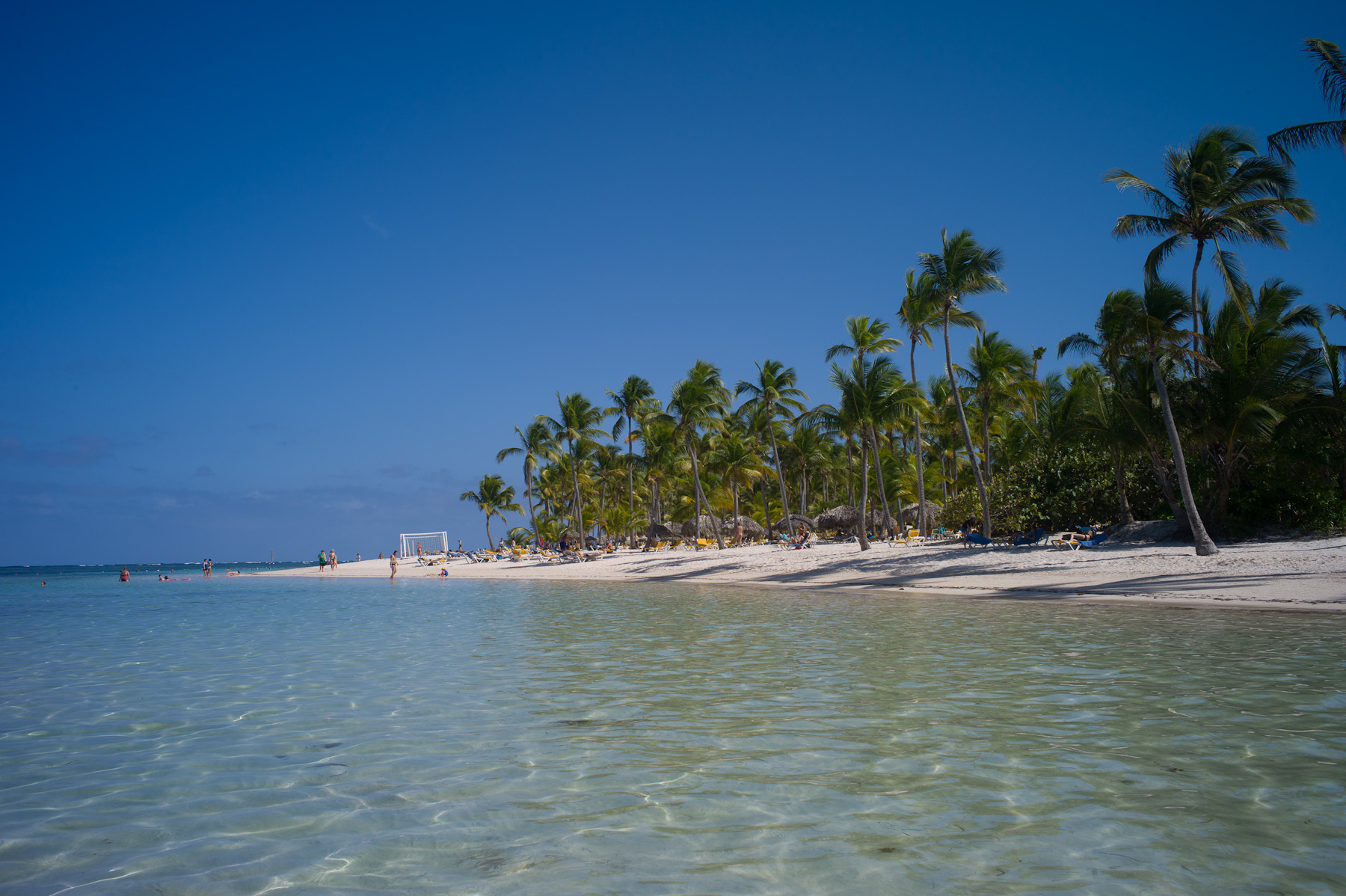 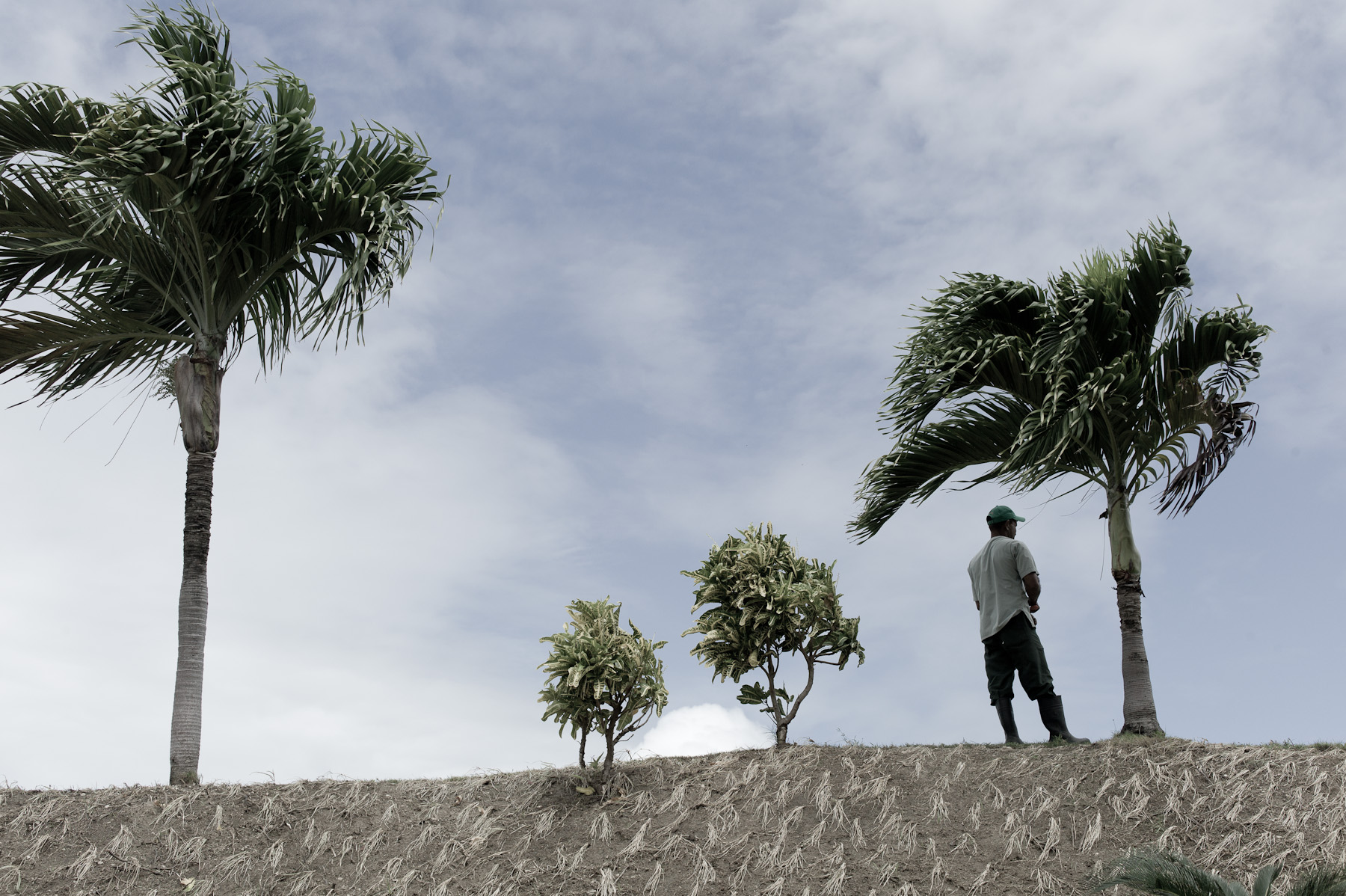 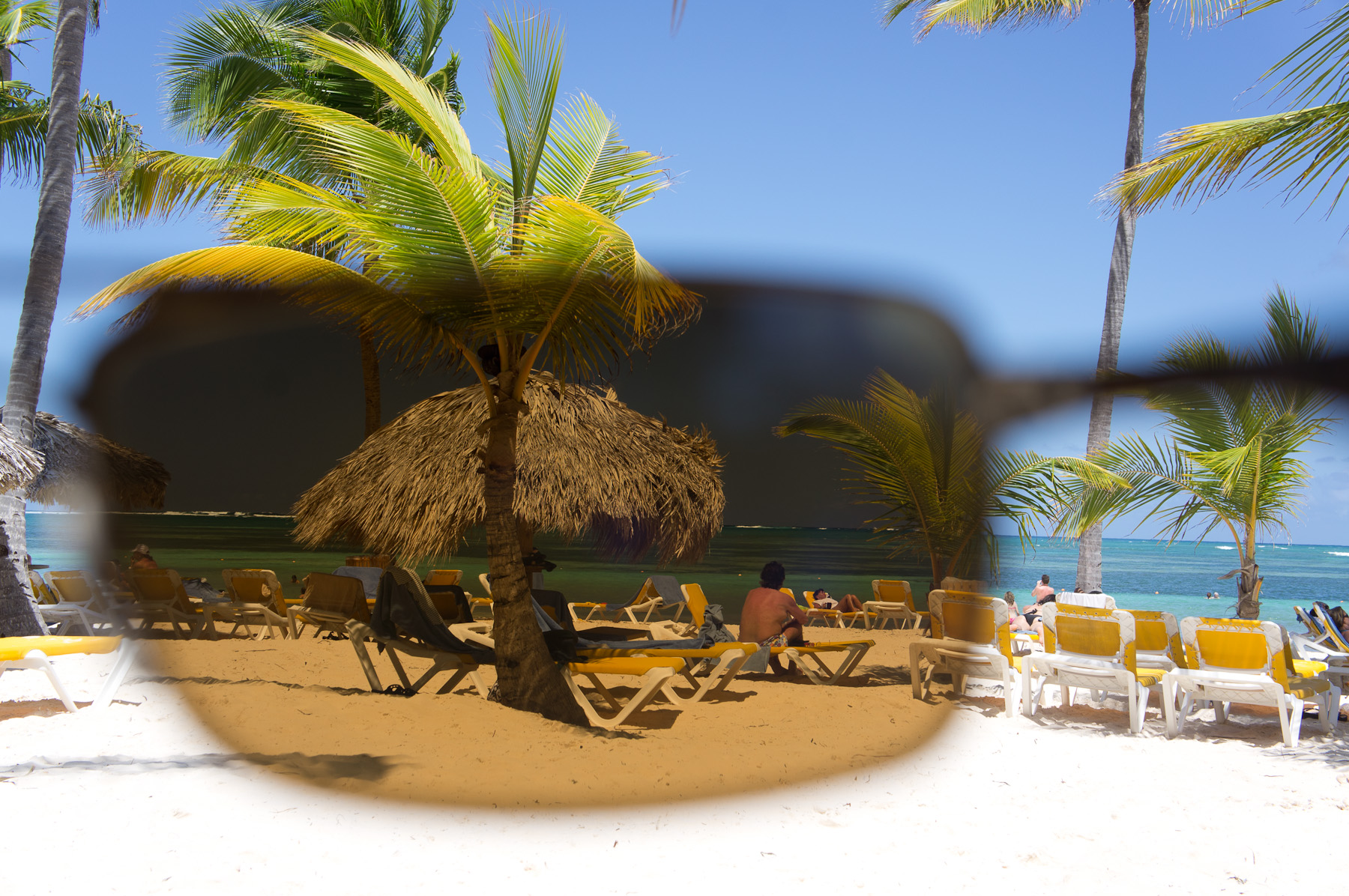 We skipped every tour offer from jungle excursions, to boat trips, to tobacco field visits, etc. Most of these tours just are too touristy for my taste. While I can cope with an all tourist resort once in a while, I don’t get used to guided bus tours that rush you from one sight to another. After a day in the sand I walked a mile to the nearest PADI diving station. I signed up for a rescue diver class, which took me five days to finish because of all the material that you have to learn for it. To get to the station I had to walk along the beach. Quickly I noticed that the beach condition changes once you would leave the outskirts of the resort. The whole waterfront was covered with a mix of sea grass and plastic trash. Nothing that people had dropped there. Just trash swept on the beach from the Atlantic Ocean. On another day I went running. Not being a fan of beach runs I picked the road, passed the golf course and to the surprised look of the security guard, passed the front gate of the resort. After a short distance I reached the closest village and ran through it. It was obvious that the way people live here is very different from how people live in the resorts. Houses were basic, most people were on the street hanging out. Men would sit in the shade or inside a local bar, while you would see the women taking care of laundry or kids. The next morning I grabbed my camera and walked into that village again. Twice people asked me to buy something to smoke, which I declined. Once I got offered  a chica, which I declined as well. At some point a black car stopped and a few guys inside with 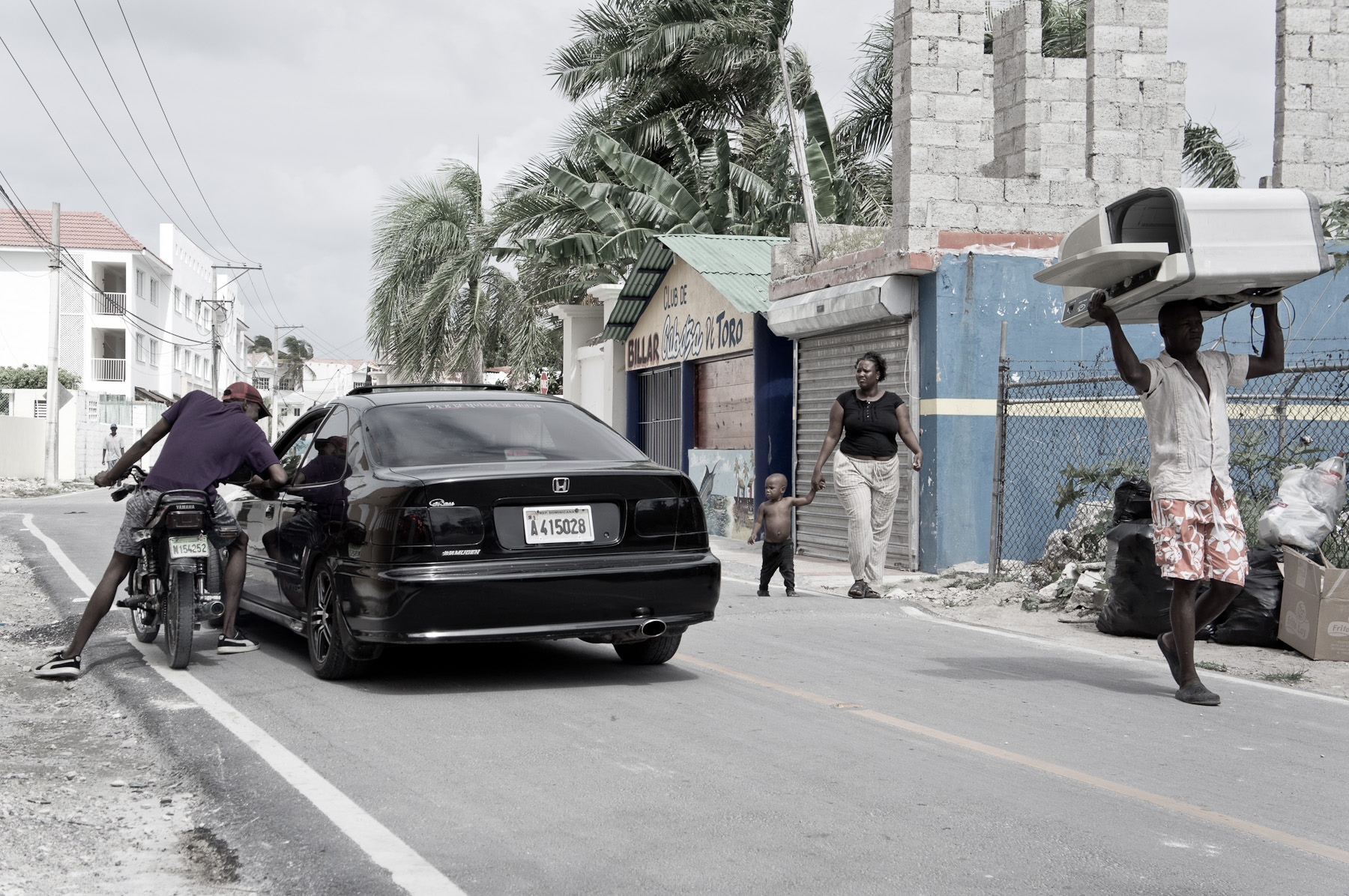 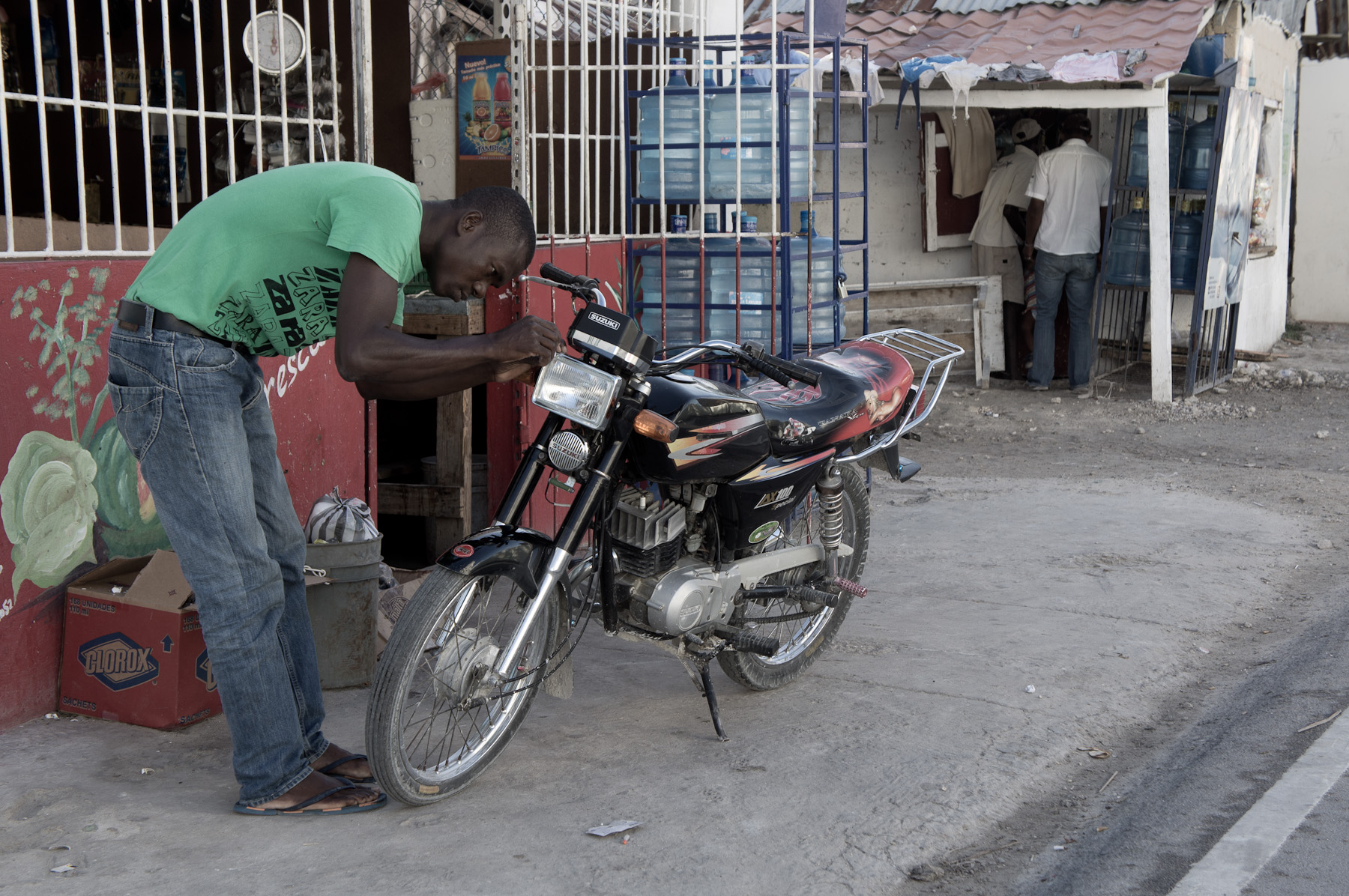 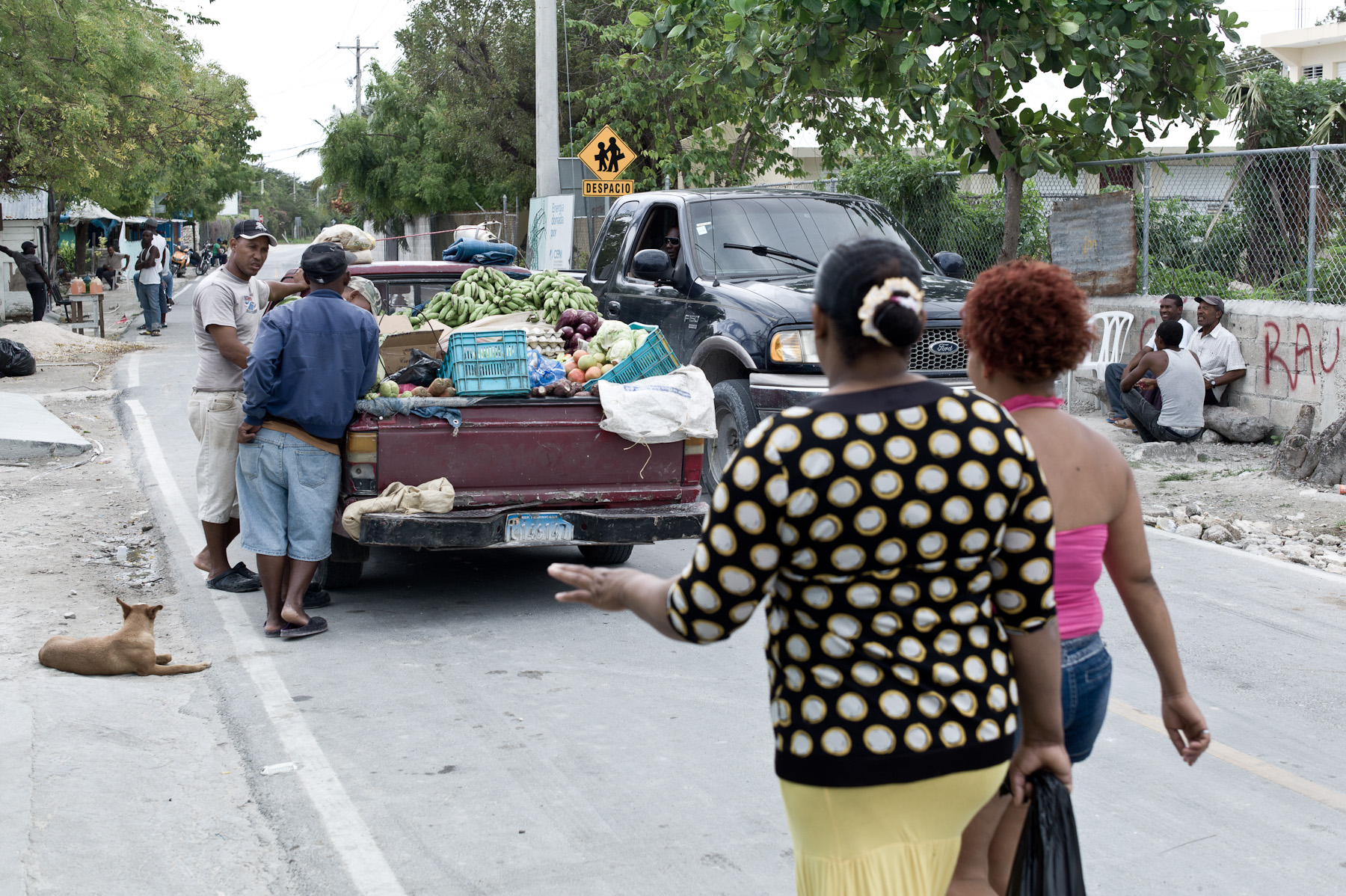 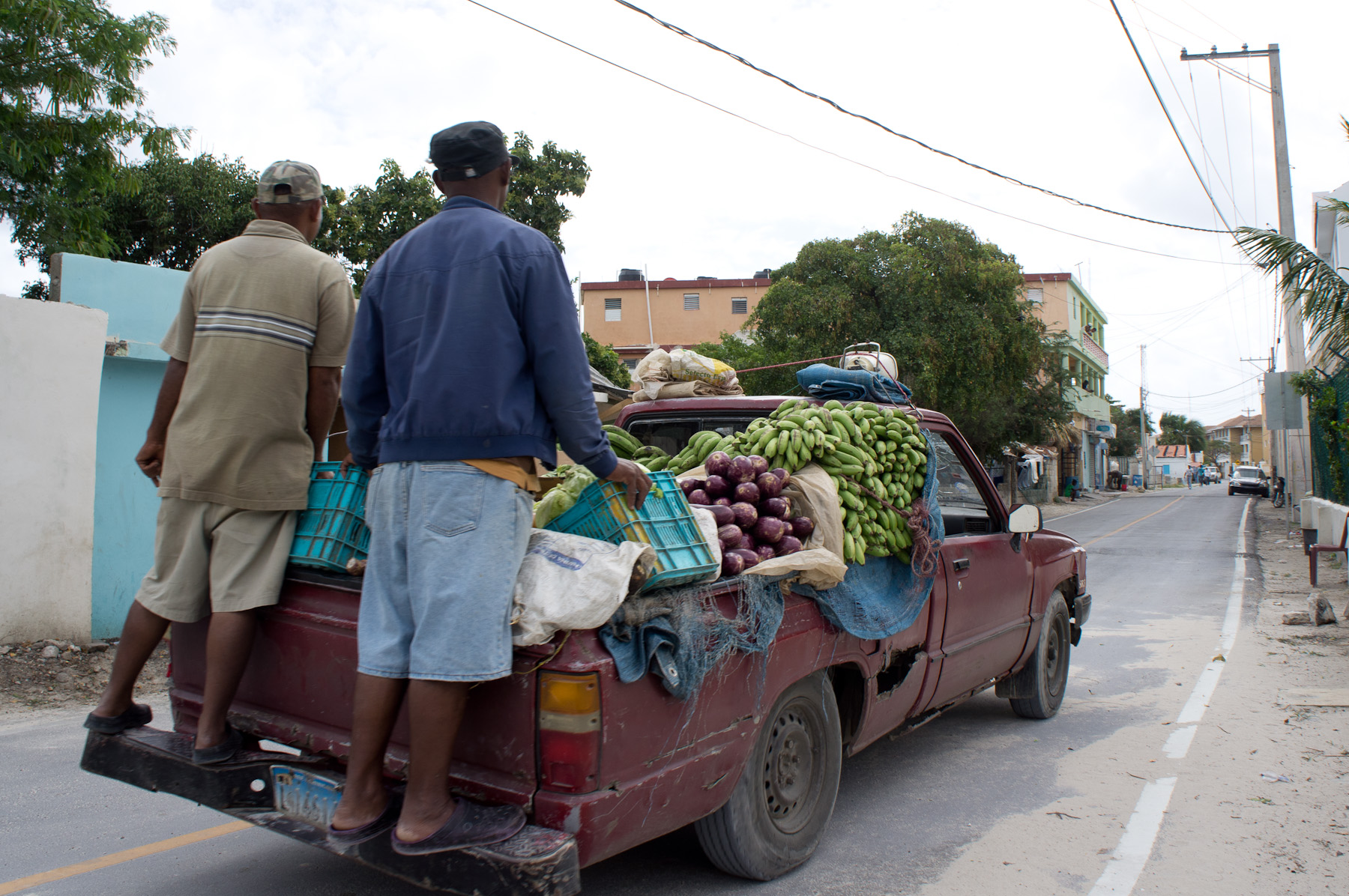 sunglasses just said ‘hello’ before they moved on. I walked around and took photos. 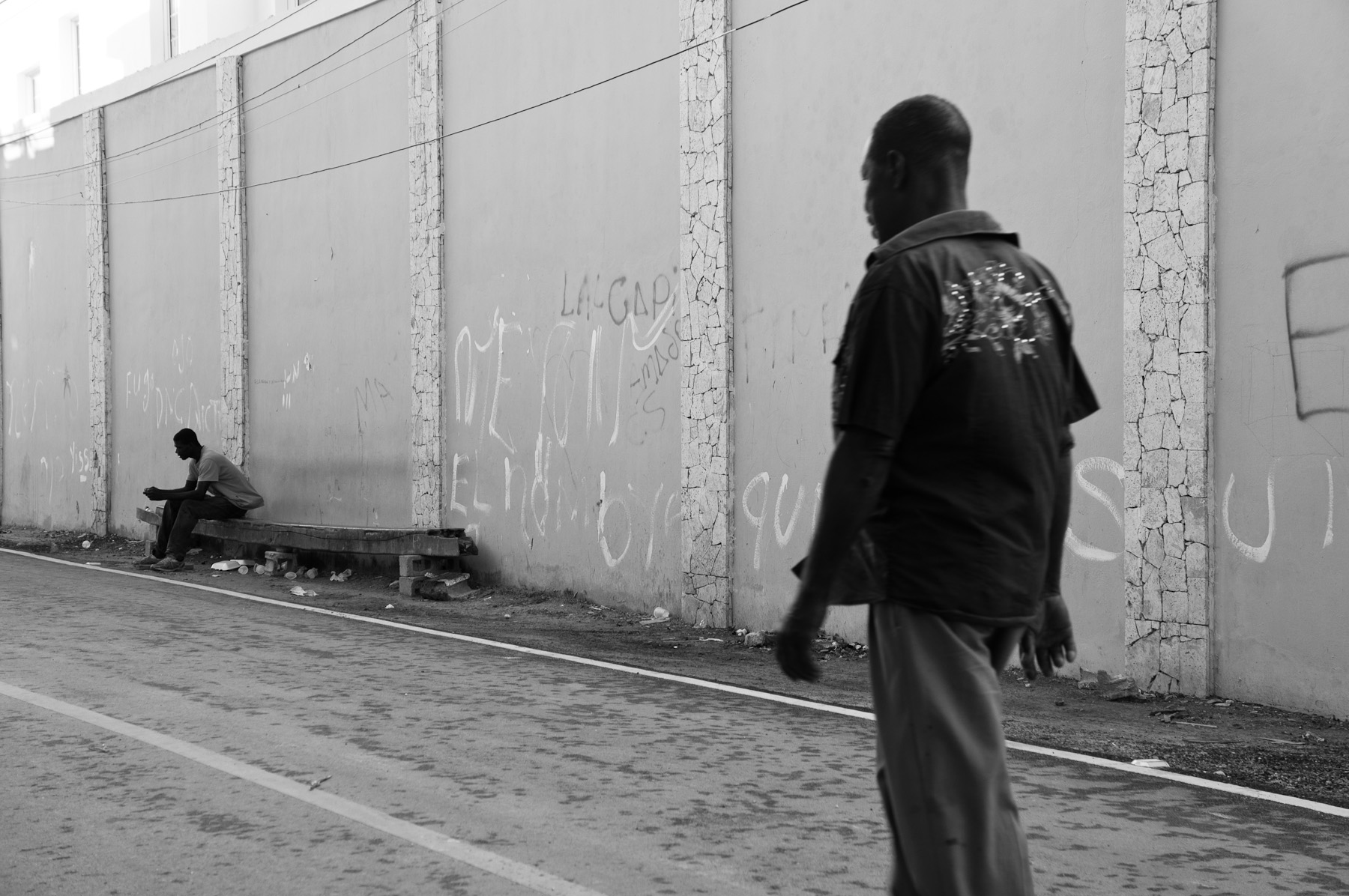 I wasn’t sure how people would react to me but most ignored my presence or just said “hola”. I wished I could have communicated in their language. At the diving station I talked to my instructor Alexis about the resorts. He told me that most of them are owned by foreigners, the moneys leaves the country. Most of the workers live in towns one hour away from the resorts. Buses paid by the hotels 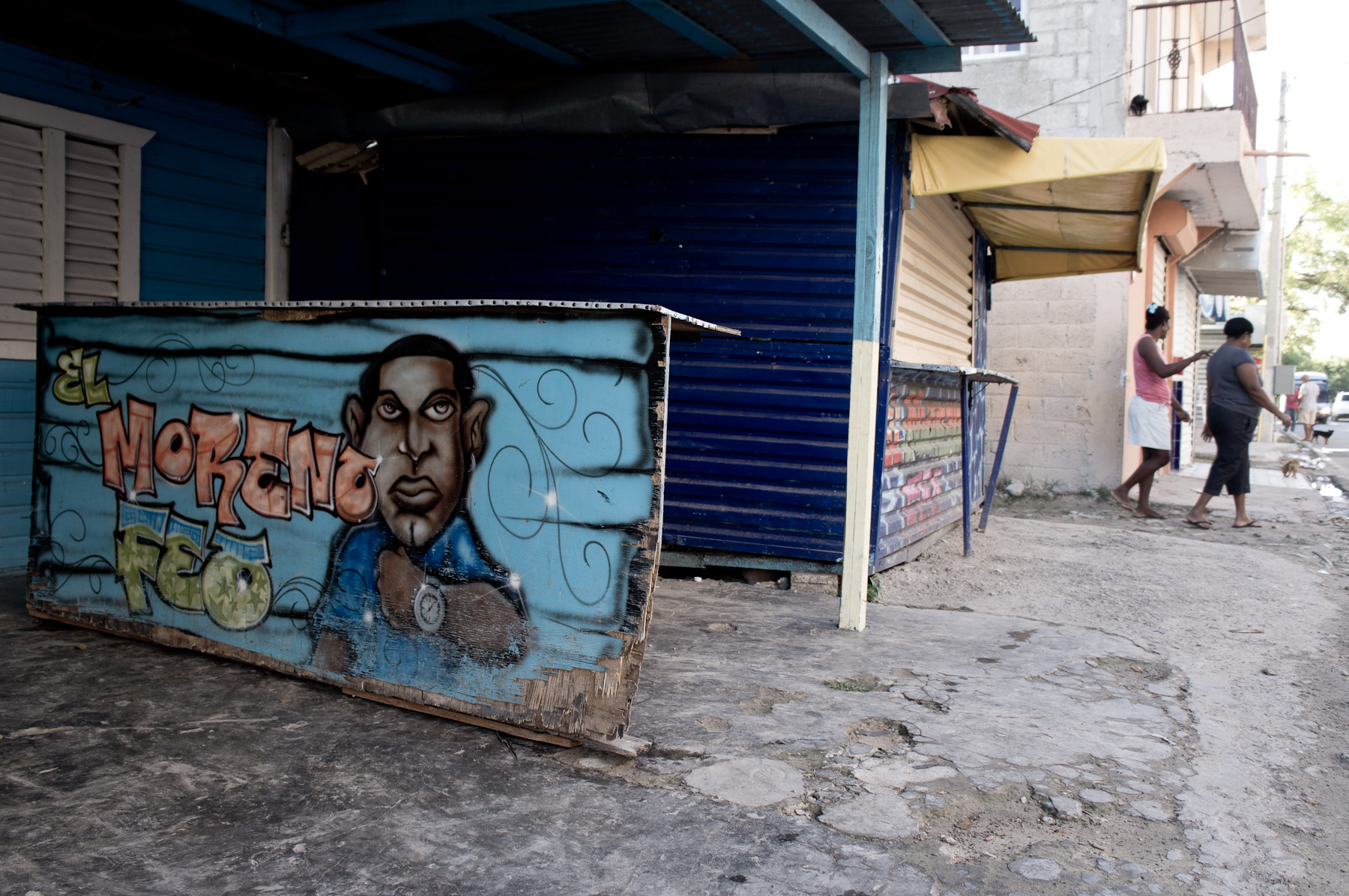 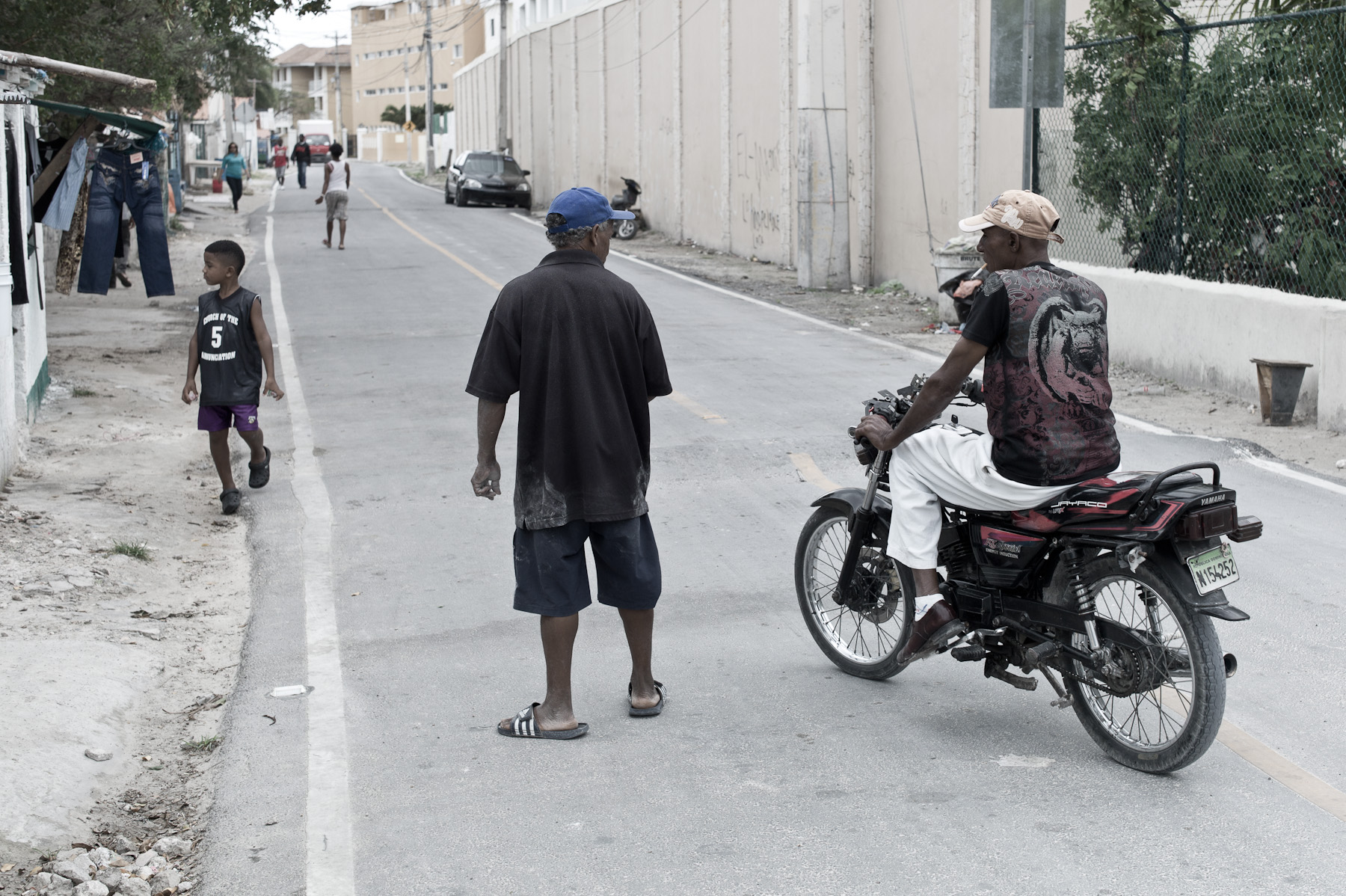 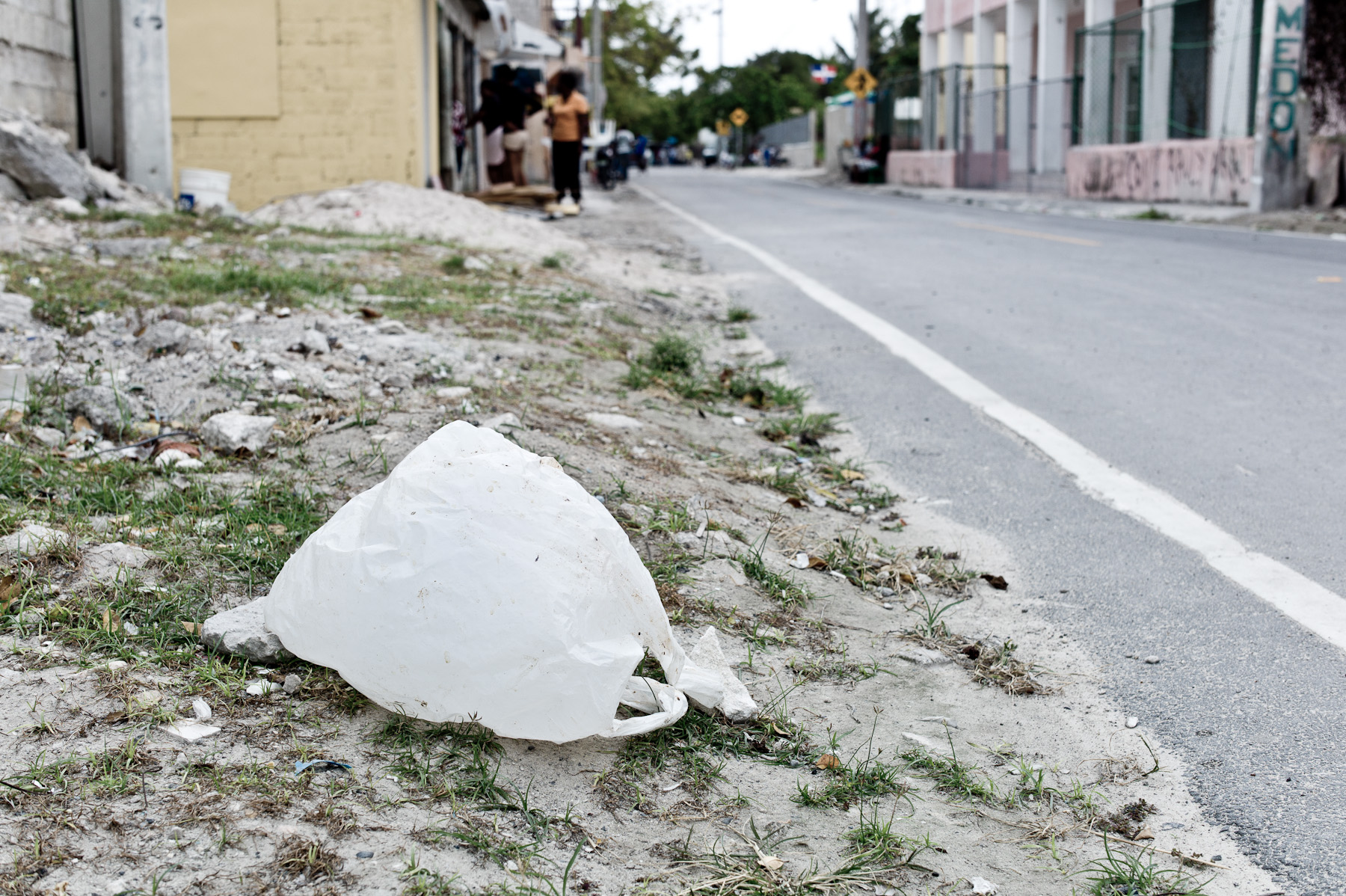 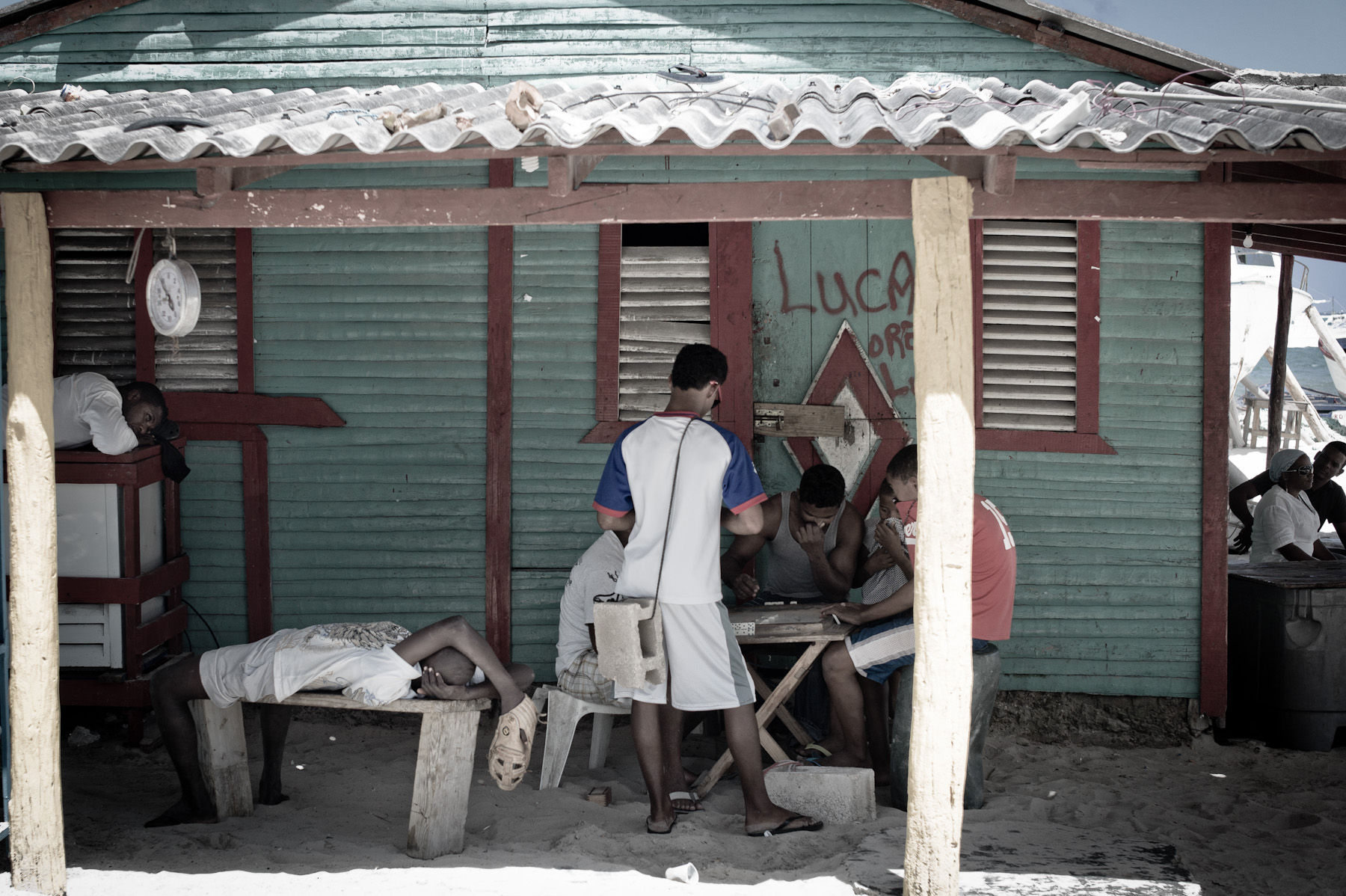 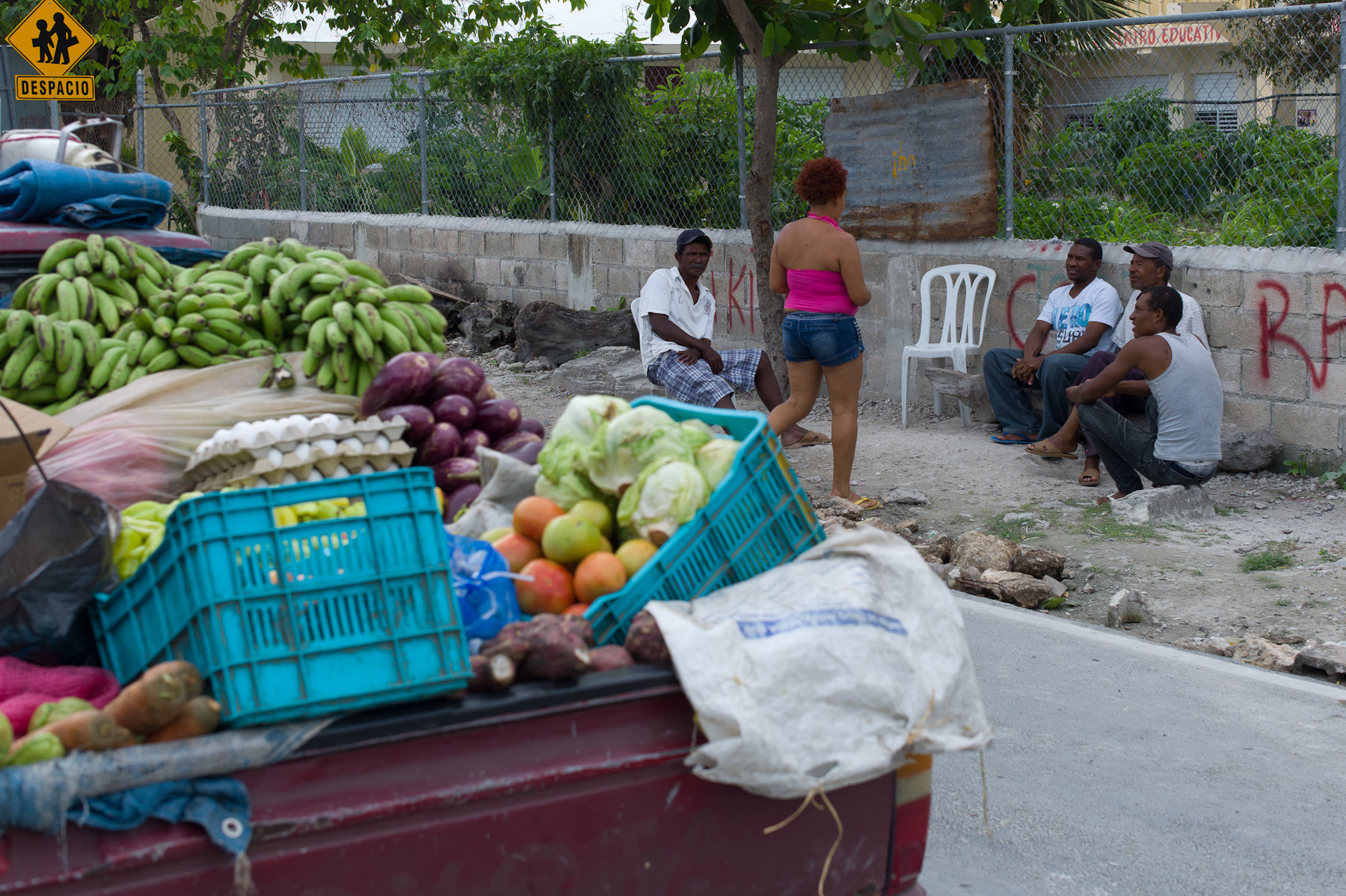 move them back and fourth frequently. 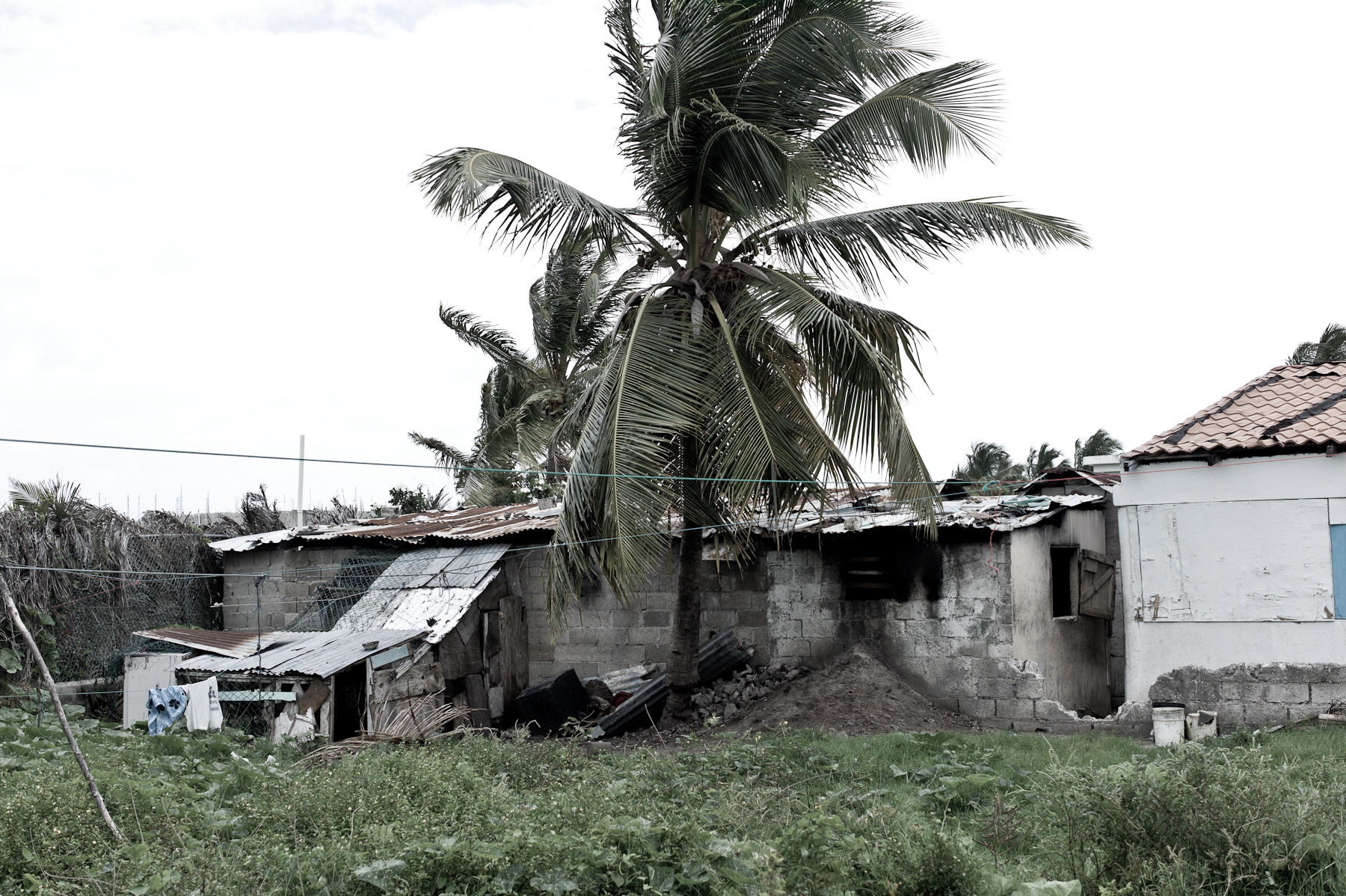 The people in the village don’t really benefit from tourism. They try to sell a few items on the beach or on the street but they can’t compete with the ‘constructed’ village and market inside the resort. 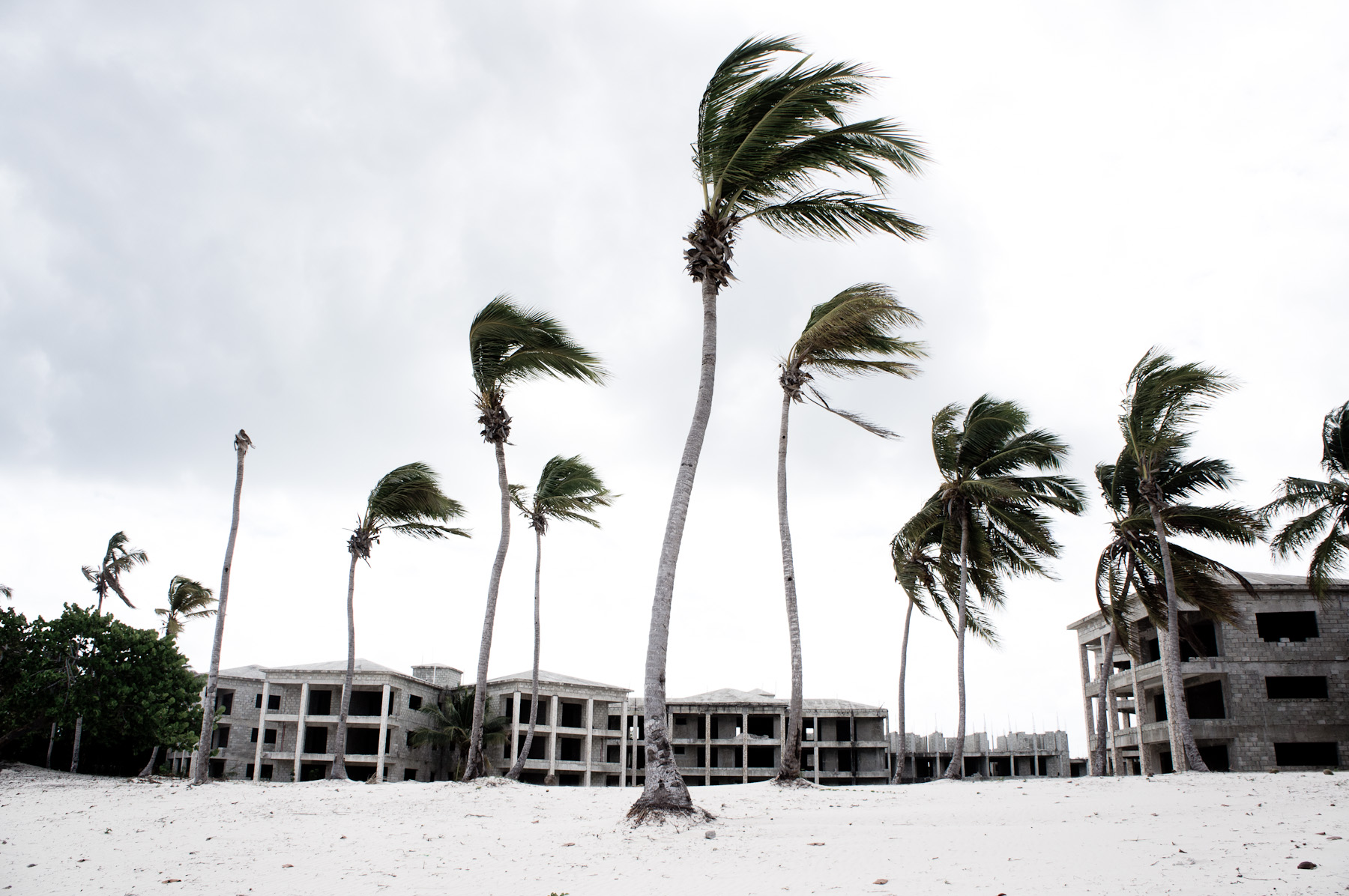 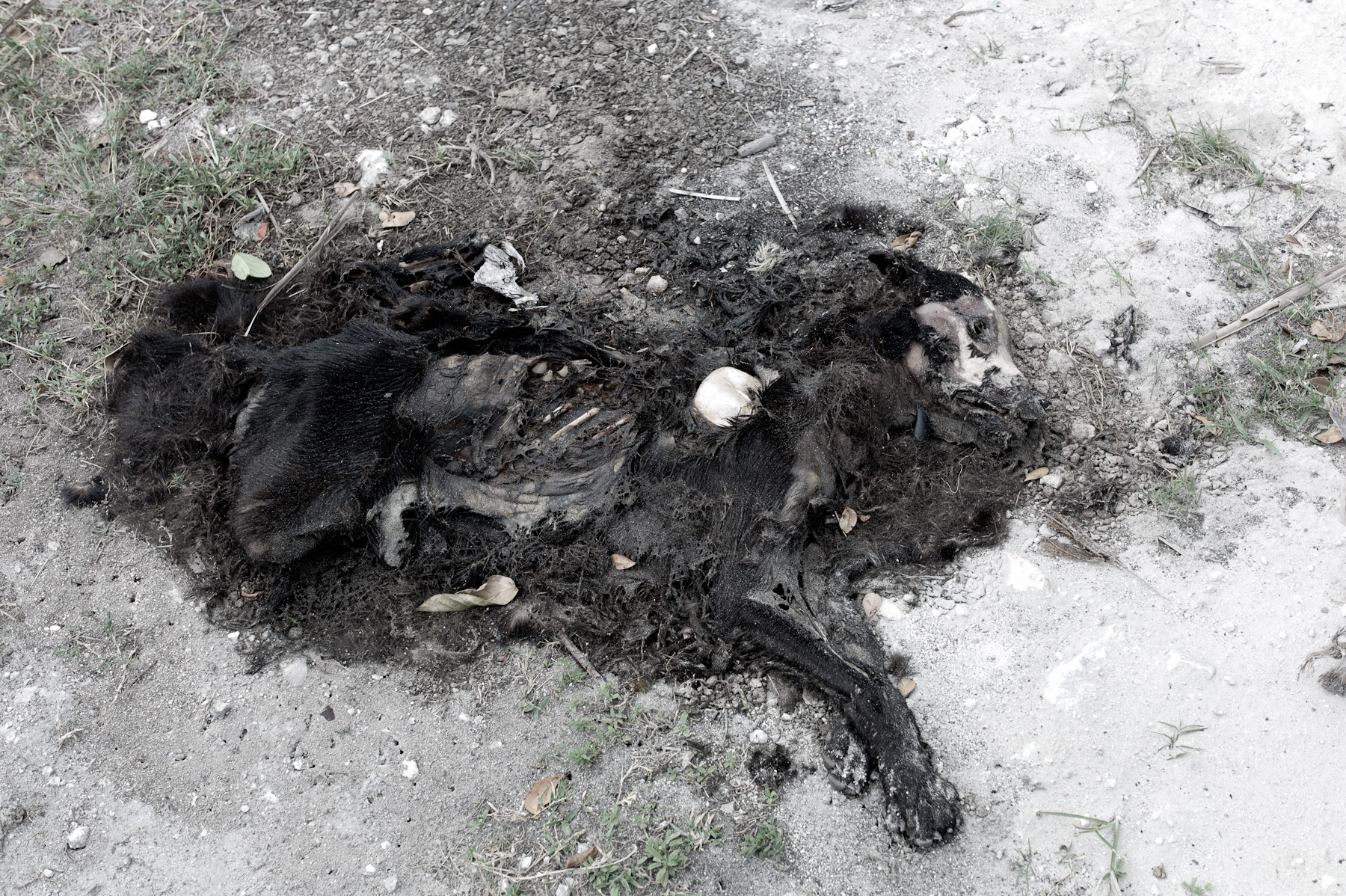 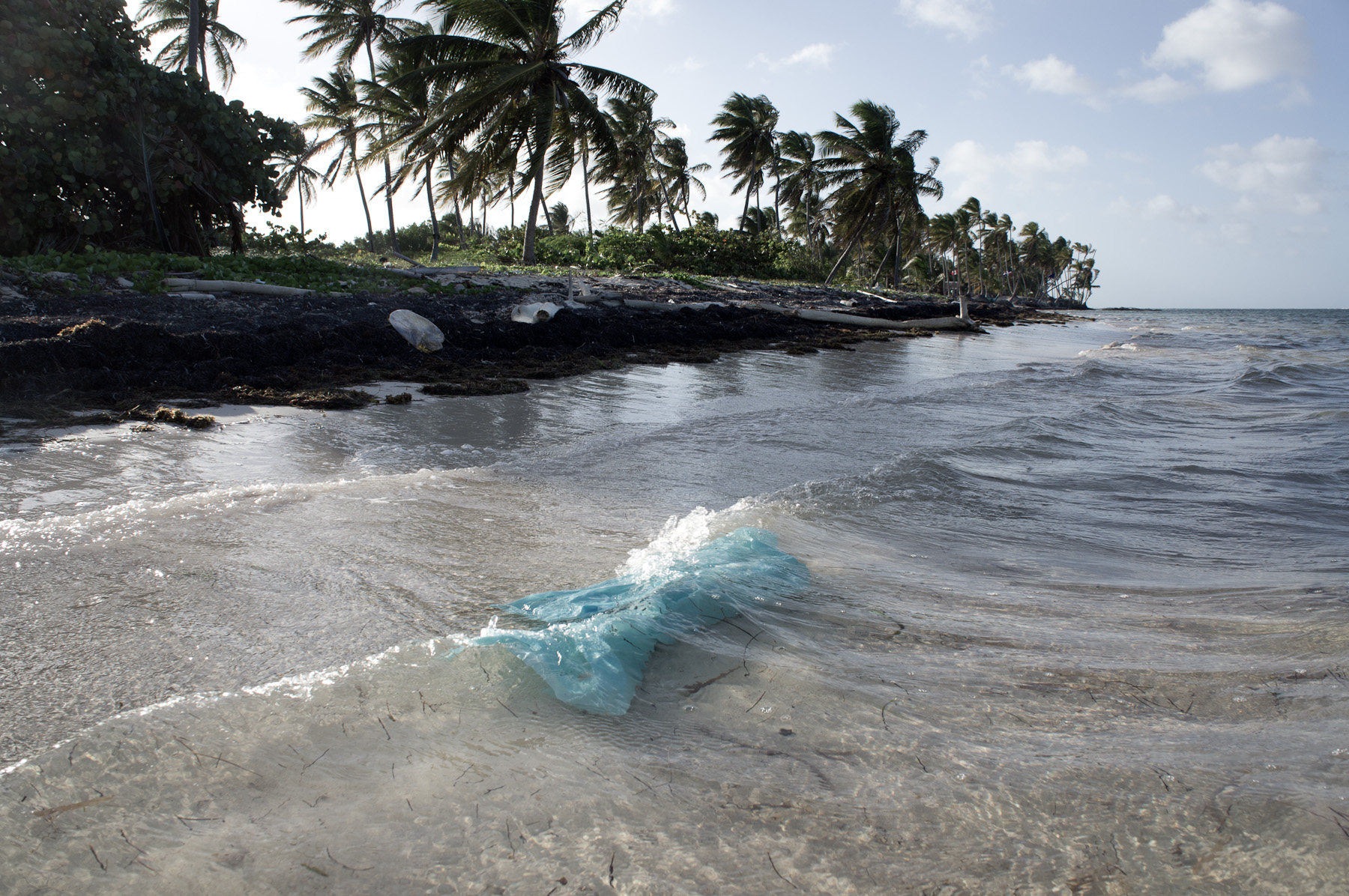 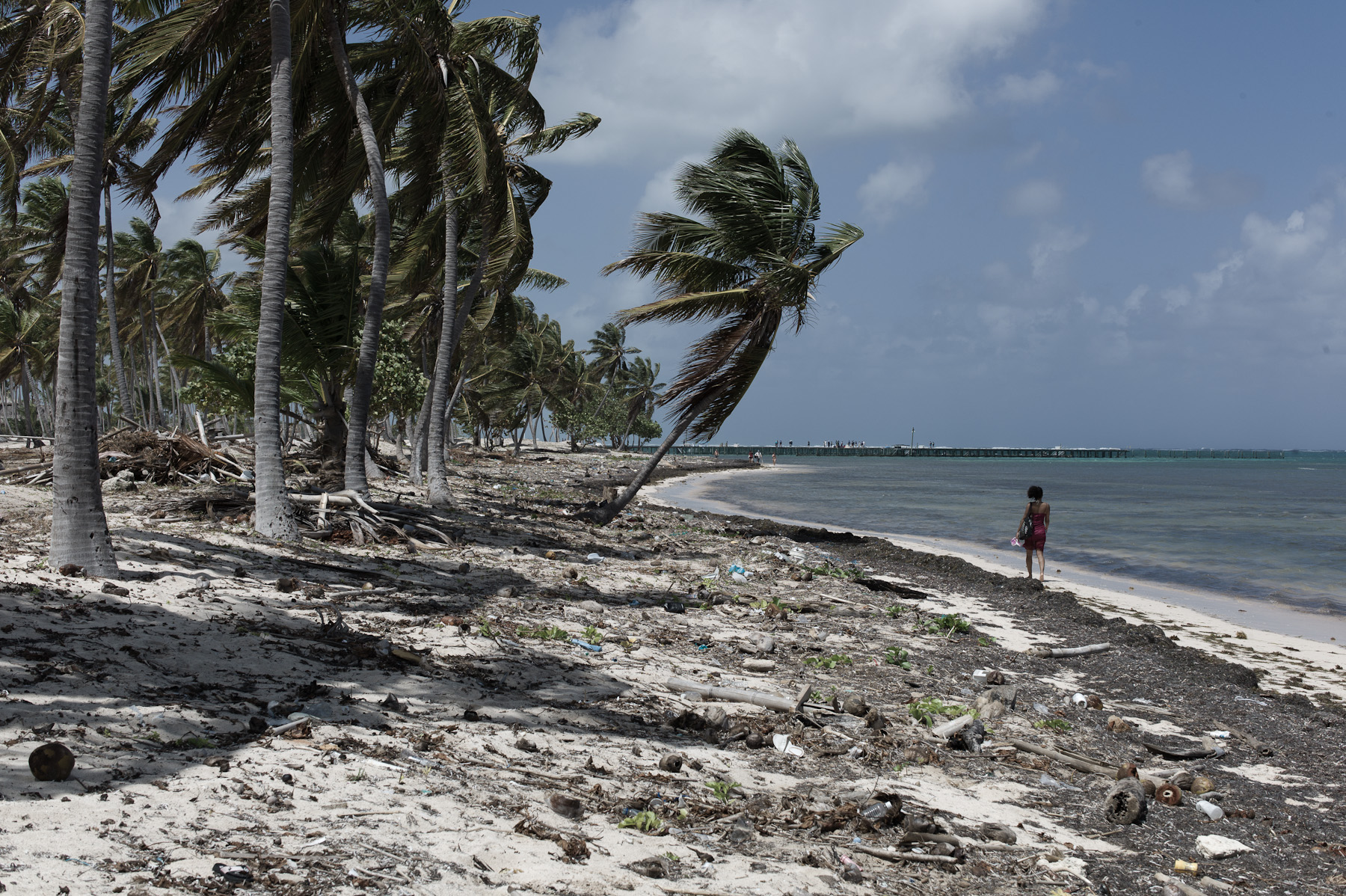 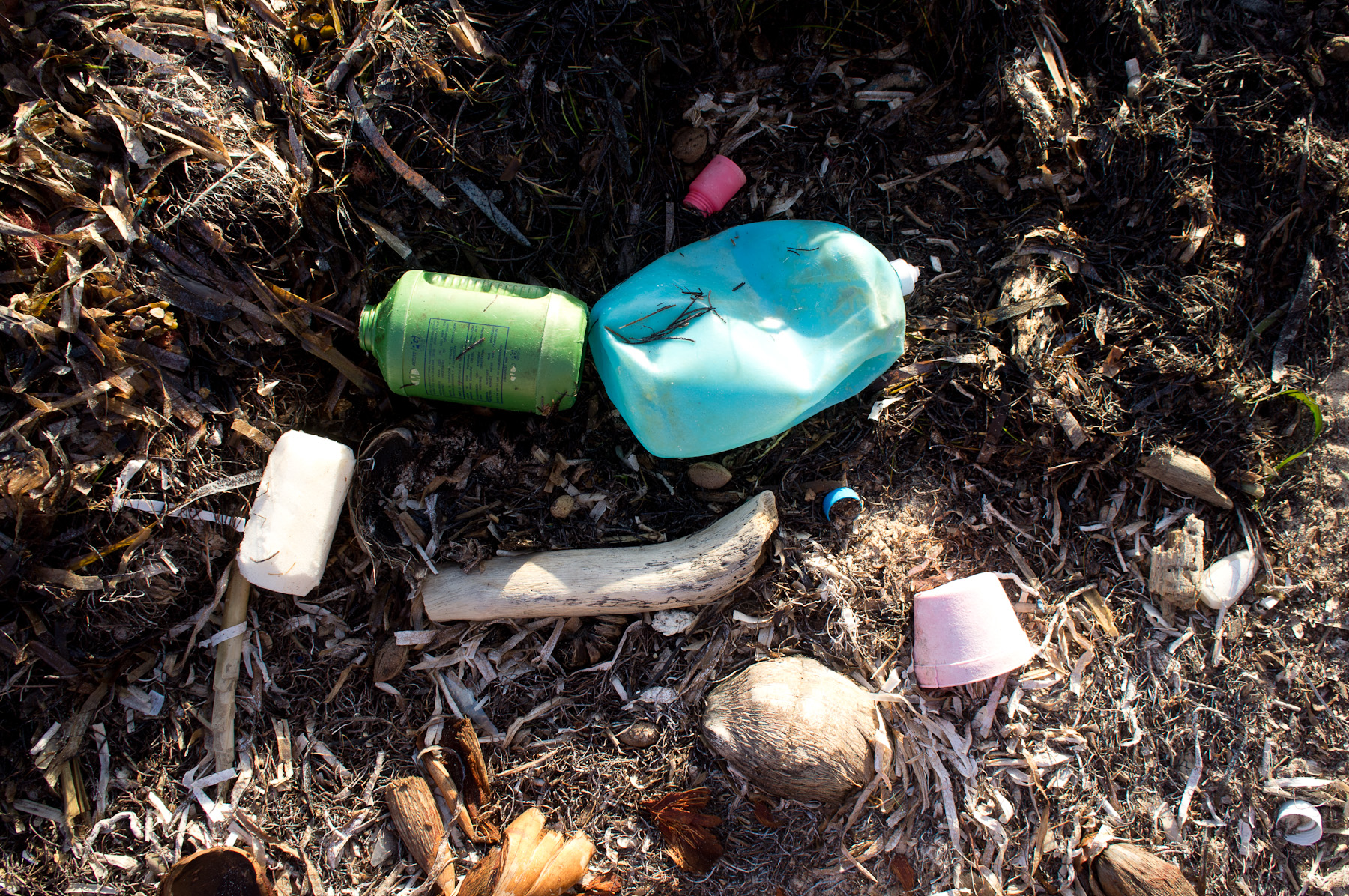 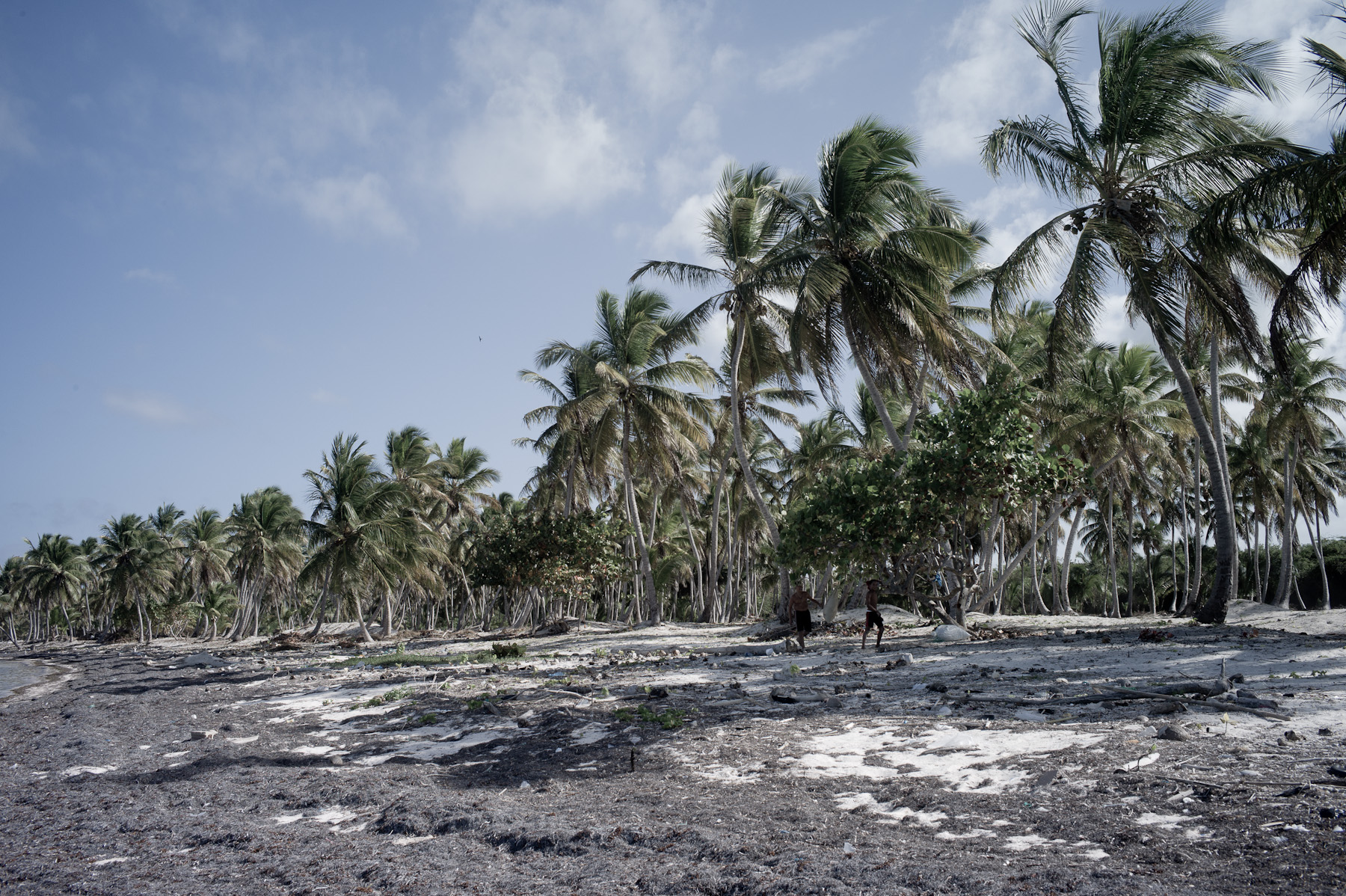 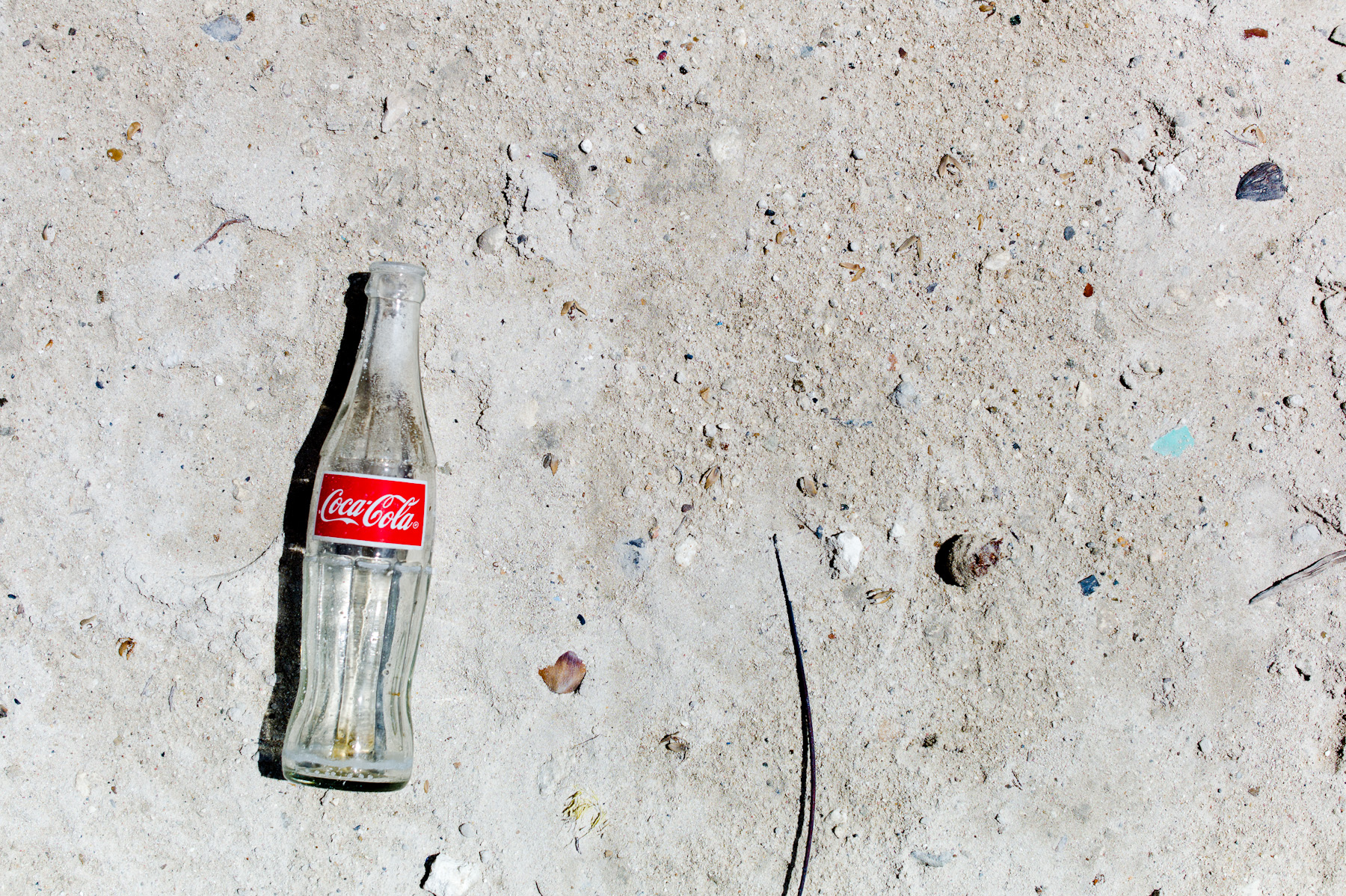 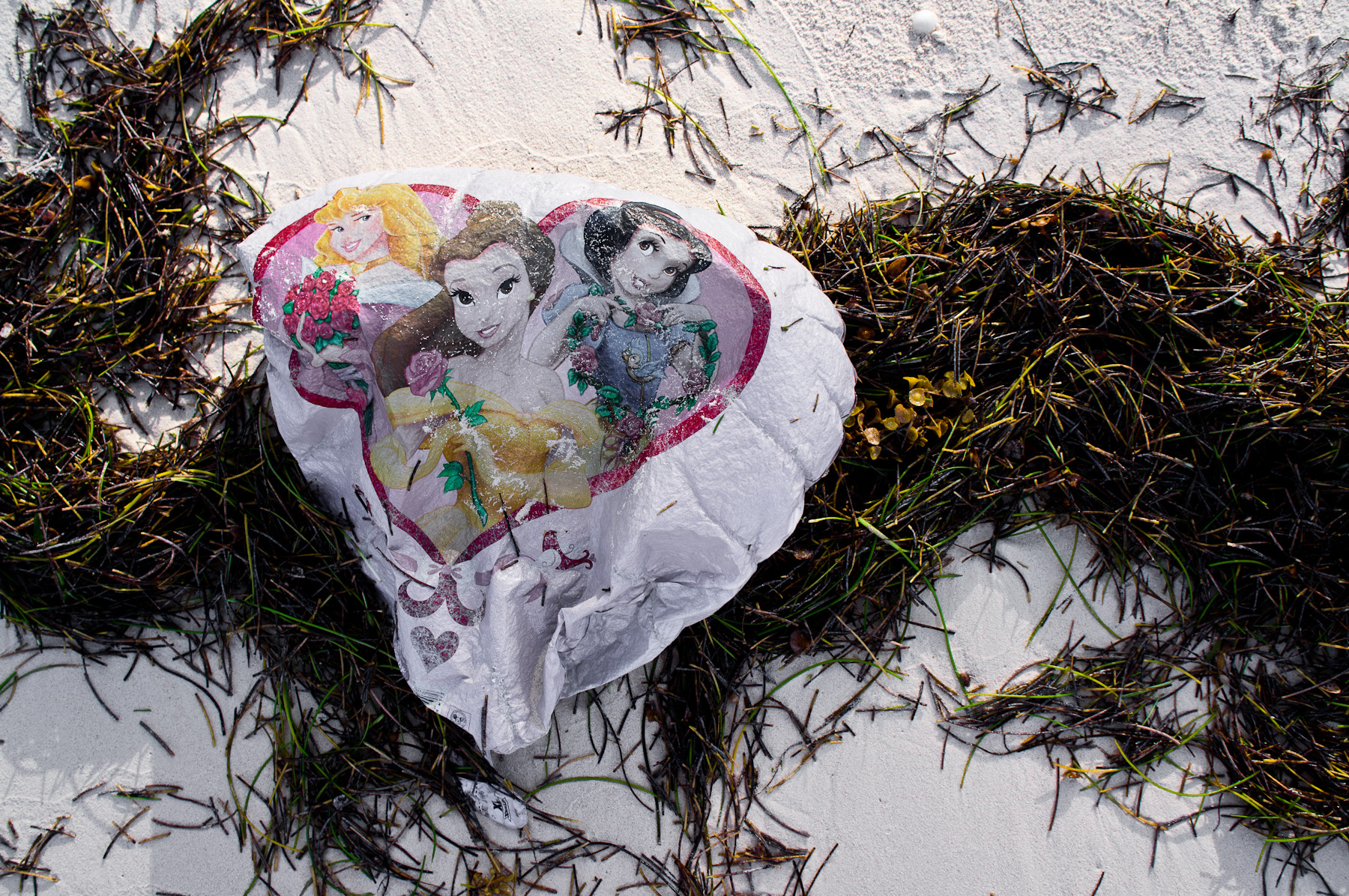 The public beach is filled with trash, that nobody feels responsible for or has the money to deal with it. The contrast between the resorts and the locals couldn’t be more extreme. The paradise that we experienced has everything you could wish for, but it is a fabricated landscape. Busy workers clean the beaches every day, cut 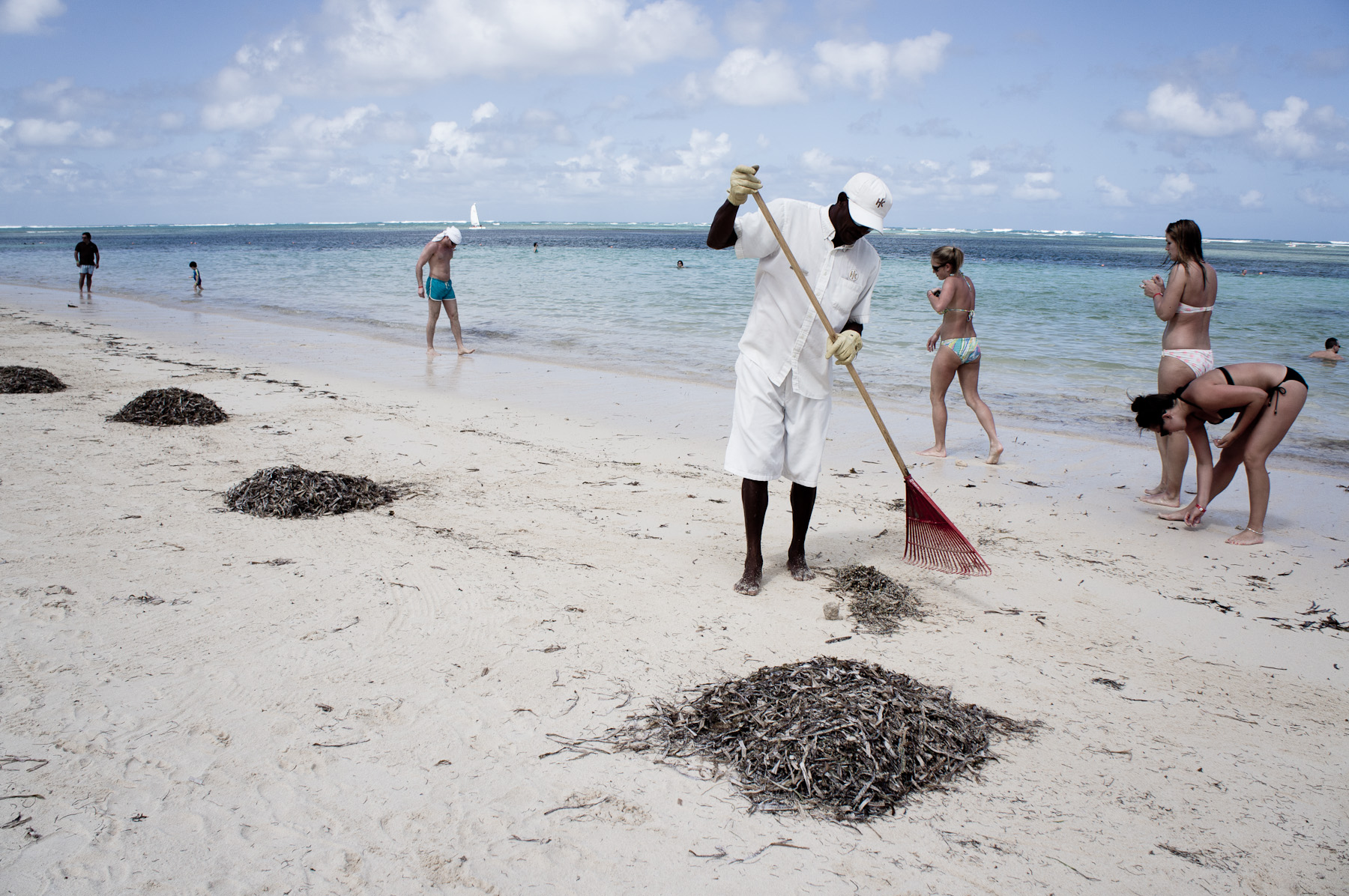 the lawn, remove the coconuts from palm trees so nobody gets hurt. 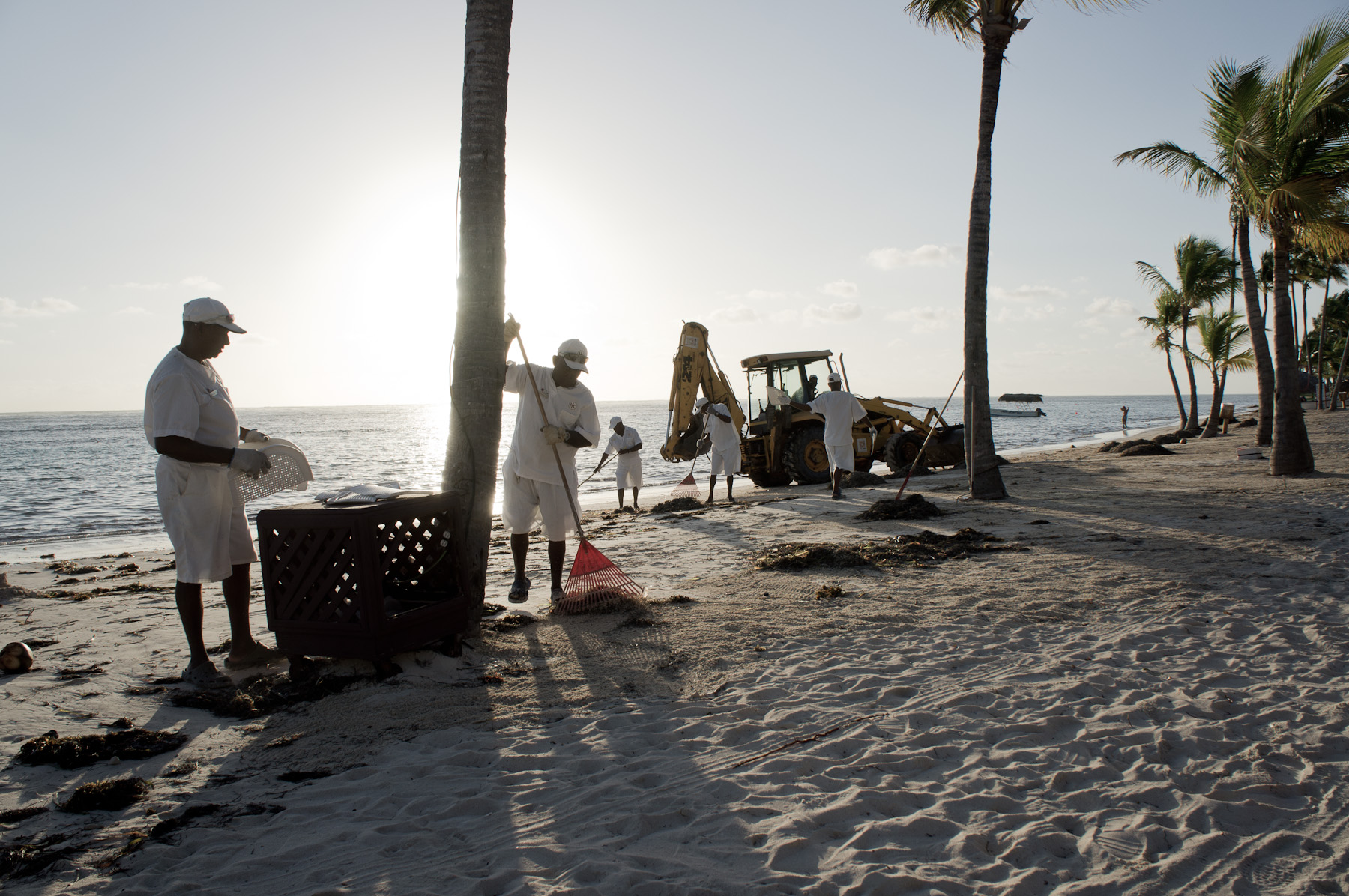 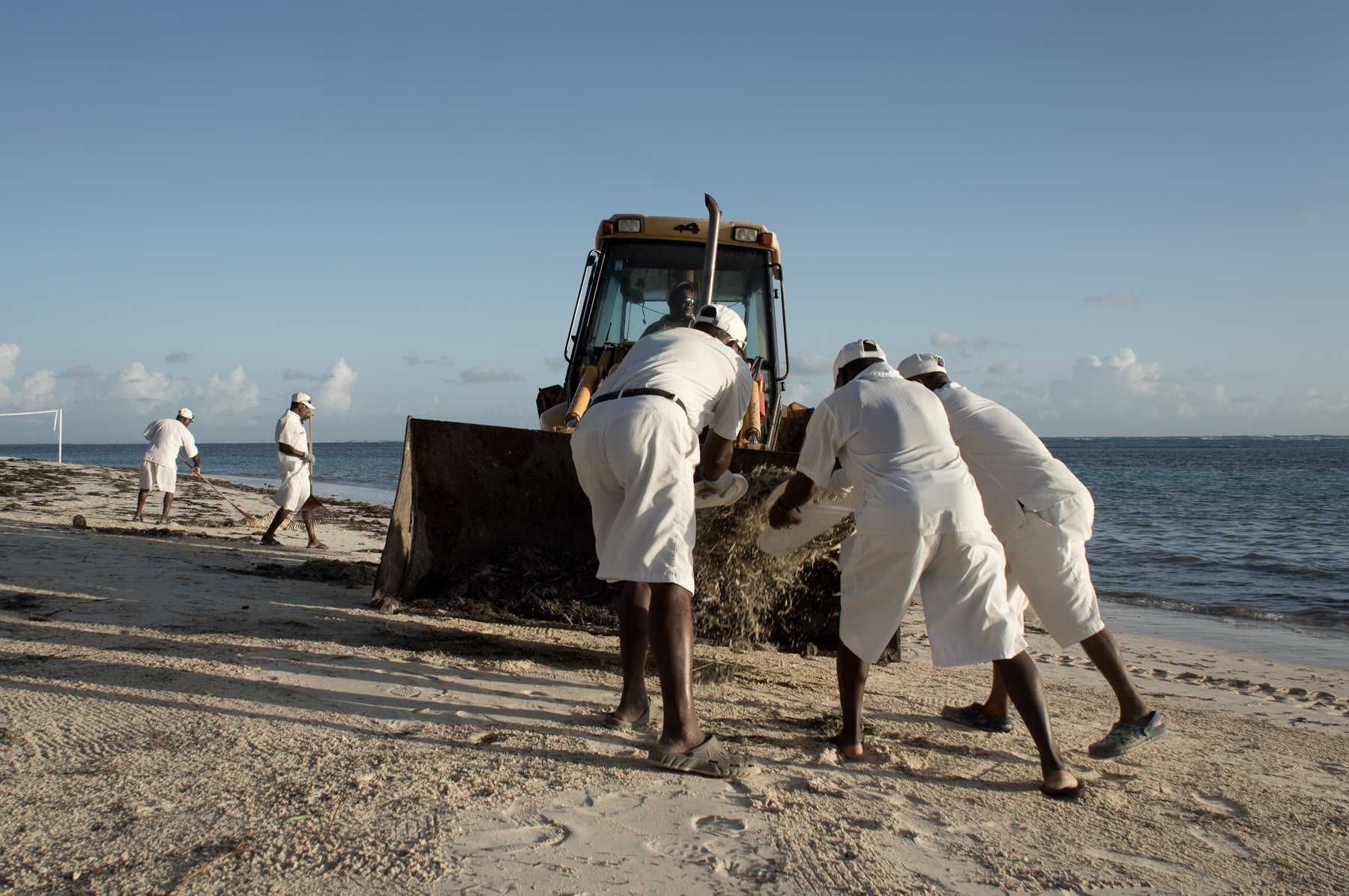 In the evening they drive and dump giant clouds of poison into the parks to kill all mosquitos and most likely other insects. Those who handle the poison don’t wear masks. Around a few corners along the beach I found a giant construction side that has not been touched in months or years. I assume the owner went out of money during the recession. Don’t get me wrong, I enjoyed being there. The water was beautiful, the resort beach spectacular, not crowded, our room was in the front row right on the beach, food great, the diving fun, the people friendly and interesting. But it leaves the strange feeling that what we experienced as a paradise is just a modern version of colonialism, in which we enjoy what a country has to offer from a protected satelitte, where we leave scars in the land and the people left with not much. D!RK 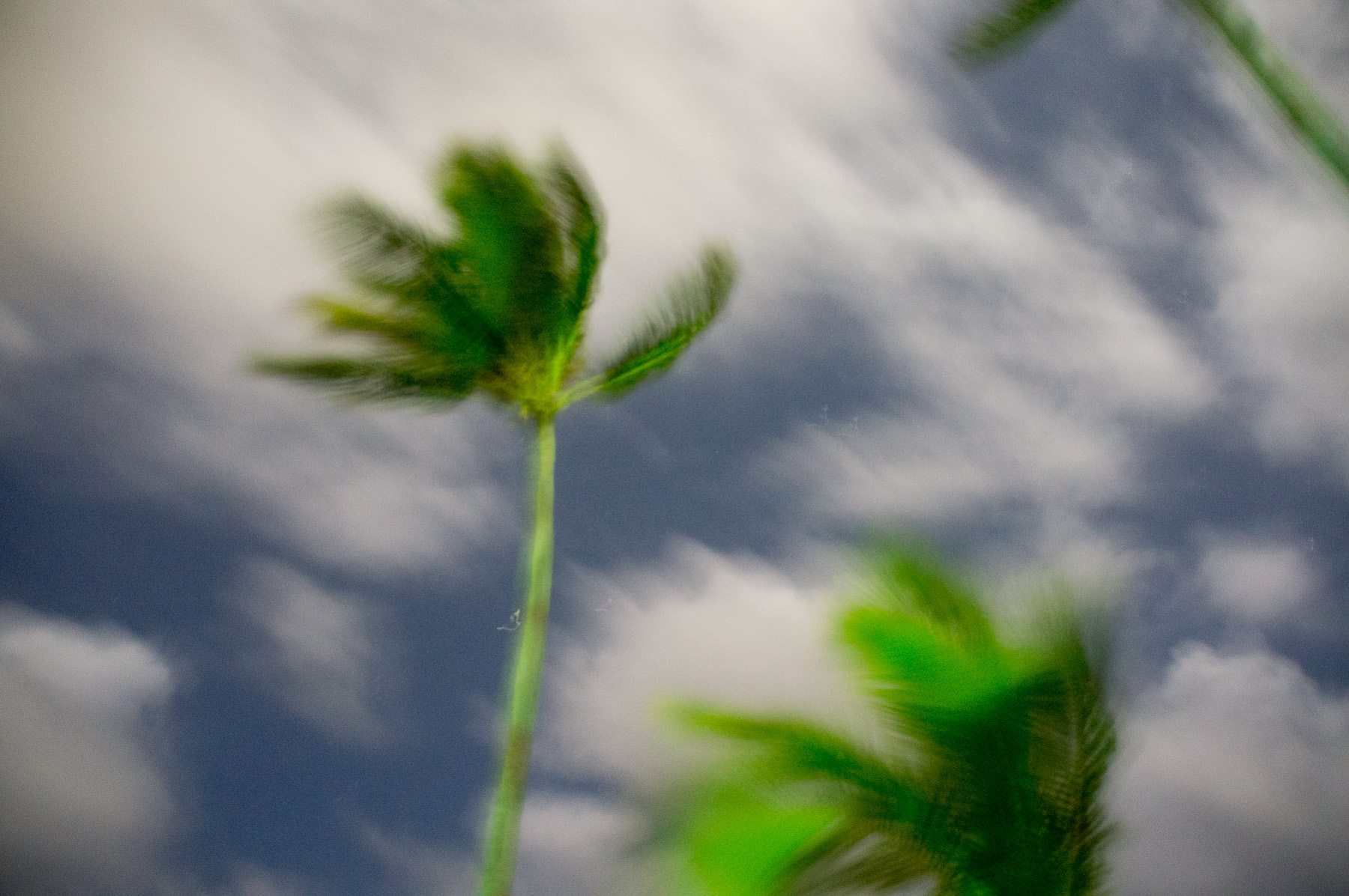