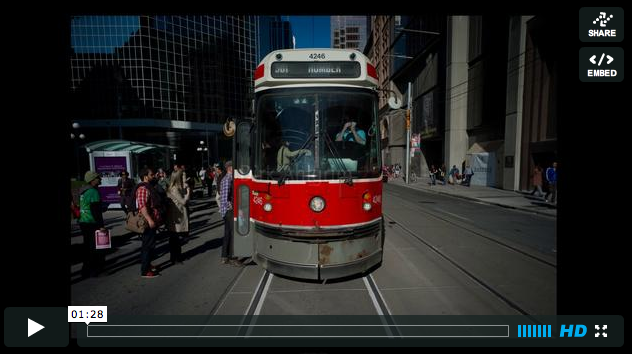 Yesterday I finished my project at the MagnumPhoto workshop in Toronto. It had been a tight week with lots of learning from David Alan Harvey.

Day 1 Student portfolio review all morning long and free street shooting time in the afternoon. I wondered around downtown and Kensington Market to figure out ideas and locations.

My goal was to engage with people on the street and to photograph an emotional story. Instead of just “stealing” a photo I talked to anybody who seemed to be interesting. A couple that was hanging out in front of a church, a really old guy in western outfit, who traveled around the city on a scooter that was covered with flame stickers. I had two guys approaching me in a Chrysler 300 at 11pm on the street because they needed someone to photograph them. Their goal was to hit the Hip-hop scene ‘big time’. Sure. I spent time talking to a guy who was hanging out on the street with his oxygen supply, I talked to a woman who had to transport six cats in four containers to a new apartment because they found bed bugs at her place. Later on another guy with a dog, who knew the woman with the cats, told me that all the cats got put down. Who knows. I photographed them all. None of these images survived. Each shot was ok but nothing really for a compelling body of work.

So the first afternoon was free exploring. I liked one shot of a woman in red standing at a street with three red cars passing by and another shot  of a girl sitting on a bike with lights coming from all sides.

Day 2 We reviewed ten shots and selected the most interesting ones. David Alan Harvey picked six out of my ten. First I thought I would shoot everything in black&white. When I looked at the images  I was surprised how well the color shots worked.

They popped. It was also the first time that I tried out my new 21mm Zeiss 2.8 ZM lens. First I thought it would be too wide. Over the duration of the workshop it became my primary lens. I decided to stick with color and to get rid of the traditional look. I wanted to do more contemporary street photography with the Leica.  Before we went out shooting again, we had a long lunch at a burger place, playing around with everyone’s cameras.  After too much food and talking I had three hours left to shoot. I focused on the color red and  switched from an emotional story to a visual one. Almost everybody changed their themes during the workshop. What they thought they would do changed based on various factors, like new inspiration, meeting different people, seeing different opportunities, etc. In the end you have to adapt to what feels right at that time and stay open minded. As David said; be relaxed but focused.

I shot for a few hours before I had to get back to two evening lectures with Bruce Gilden and Bruno Barbey. Both their work is incredible and if you see Bruce’s close up work you really wonder how often he must have gotten into arguments.

Lecture until 10pm, back to the hotel to do editing until midnight.

Day 3 Took some shots at 7am in downtown Toronto. Morning review. My theme on red works but I have one image from the first day that we all liked but didn’t fit. It has yellow elements in it, not red. I decided to head out in the afternoon to spend two hours shooting yellow. Between lunch and shooting I had to wait for almost two hours. The sunlight is too harsh and before 4pm it is useless for what I was doing. I needed low light, reflected light, or overcast lighting. 4pm until 6pm shooting yellow, back to the hotel dropping off stuff , lectures with David Alan Harvey and Eli Reed. Back by 10pm, editing until midnight.

Day 4 A terrible night. I had a bacon burger, which was too heavy for my light sleep. Anyhow, it is slowly coming together. The combined themes work. We take out some images to make the story tighter. Time to relax a bit. David shows us an entire set of images that he took inside a private Club in the Bronx. Seeing what he was doing before he got the shots that he needed is so inspirational. The day before I found a shop that sells old National Geographic magazines. I bought one and surprised him with it. It has his first cover and his first full story in it. He had no copies of that magazine. Now he has two and I have a signed one. After lunch I spent some time searching for a soundtrack before I headed out and took two more shots. The air is gone and I have to finish the presentation draft by Day 5. Had to skip beers that night because a strong cold got hold of me. In bed by 9pm, still editing on my laptop.

Day 5 Final review. David takes out two shots of the yellow group, which makes me take out two shots of the red group as well. I want to keep the balance. Still I have too many images. The rules say eight per person. I have eighteen. Rules are there to be broken, so we declare it as two slide decks, just put tightly together. I upload the final set and soundtrack. Done.

Long lunch at a beautiful Italian place with the team. Everybody is excited. Everybody has finished their work and everything is very different. In the afternoon we meet at a private club to hang out on the roof deck. Cab to the final two lectures with a quick stop at Johnny Rockets to pick up some milk shakes. This night Larry Towell and Chien-Chi Chang show their work. Larry’s panoramic images just amaze me. His sense for composition, timing, execution is just incredible.

Saturday. Tonight we will show our slides to everybody and to the public. Time for me to do some extra sightseeing in Toronto. I want to see a few galleries and exhibitions. Overall I am amazed by this place. It is diverse, stylish, sexy, cool, edgy, contemporary, everything that Boston is not. Maybe I will publish some of my outtakes and people portraits as well. If you want to see the final deck, click on the link above. Crank up the volume, click on full screen, and let it run. If you want to know why I call it 255, just ask me. All the work from everybody will be published on Burn. I will add a link once it is online.

All I can say is that I really enjoyed the workshop. People are great, the photographers are professional, and easy going. I don’t know if David can be anything else than easy going.

Personally I moved from black&white to color street shooting. I have done color before but I always preferred black&white. Now it is different. I will add a flashlight to my set. I was so surprised what I learned about using a wireless flash during the day and at night. Results are just great. That’s something I didn’t do this week but I learned this from others. Great times.

Click here to see some of the individual files.