This is my first entry in my personal blog. I want to use this platform to tell stories why, how, when, and where I took some of my photos. A kind of “looking behind the curtain”. I have always been interested how photographers, artists, designers are creating their work. Some might argue that this would take away from the impact of the photo.
I think it adds to it. I am not telling anyone what to see in a photograph. I am just providing some extra resolution. It makes a story richer. 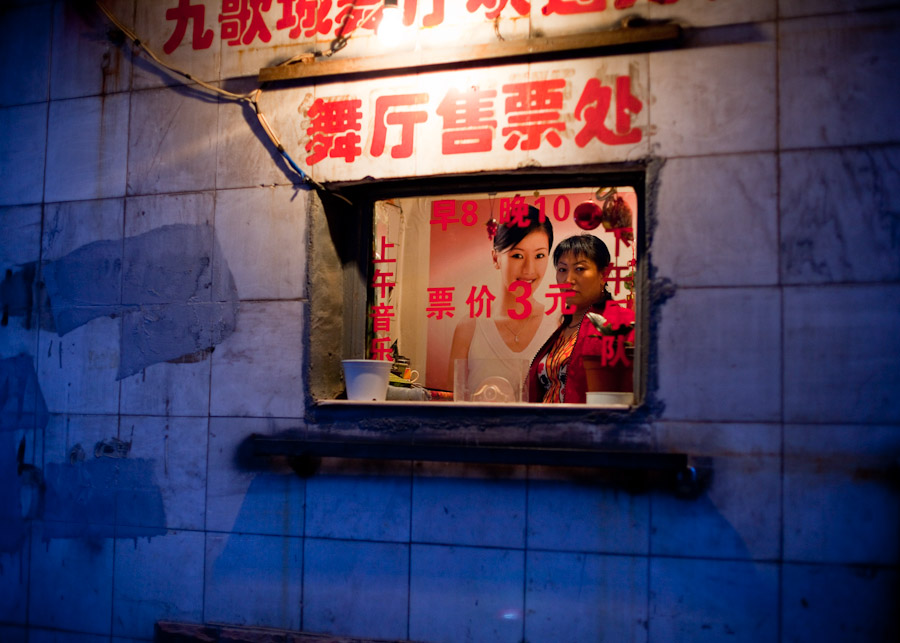 I took this image of the woman in the window in Shenyang/China. I went there in 2009 on a research trip. We had harsh temperatures, snow, and icy wind. We had already travelled to Munich, Paris, Guangzhou, and Shanghai before we arrived in Shenyang. After a couple of days doing interviews my coworker and I decided to explore the city before dusk. Light was dropping quickly and I carried a Canon 5dmk2 with a 50mm 1.4 lens. I took a few shots in the side streets before I found this window. I immediately liked the contrast in the lighting, the red graphics, and the poster behind the woman. I pressed the shutter when she looked at me with this expression of distrust in her face. After one shot I smiled at her and she smiled back. This image is full of contrast to me. The cold lighting on the outside and the warmer tone behind the window. The friendly, young woman on that poster and the not so friendly, older woman in the store. To me it represents the colliding generations in China. The young, rich, and beautiful versus the traditional, poorer, older generation.