Years ago I had the strange idea to not only take photographs but to collect some of them as well. I think that a mix of passion, financial opportunity, and Grosskotztum ( a word that can not be translated from German) came together. At that time my focus had just shifted to more contemporary artists, still I started looking at Ansel Adams prints, since they had been an inspiration for a long time. It turned out to be a quick route. Actually a dead-end street. Prices were astronomical, far out of my reach. So I looked into more recent photographers and over the period of a few years I purchased original prints by Annie Leibovitz, Joel Sternfeld, Bettina Rheims, Harold Edgerton, Herb Ritts, Juergen Teller, and others. I had some missed opportunities. Ten years ago I saw a Hiroshi Sugimoto Seascape photo standing in a corner of a gallery. The asking price was just out of reach, so I passed on it. Since then its value has quadrupled. Same with Henri Cartier Bresson photographs that were still within reach before he died. For a while I scanned Ebay because even large auction houses like Swann placed their items on that platform. In 2005 I saw an auction of a small print by an unknown Korean artist called In Sook Kim. It was a portrait of a woman, blurred, and not facing the camera. That image impressed me. It was simple and mysterous. There were elements of Thomas Ruff in there but somehow different. I couldn’t describe it but I liked it. I googled the name and found out that she was a student at the Kunst Akademie in Düsseldorf and the first master student of Thomas Ruff. (She intended to go to Düsseldorf to study under Jeff Wall, who then resigned when a student pointed a loaded gun at him. He got replaced by Thomas Ruff. Wikipedia) The image was part of a street photography series called “Faces with No Name”. 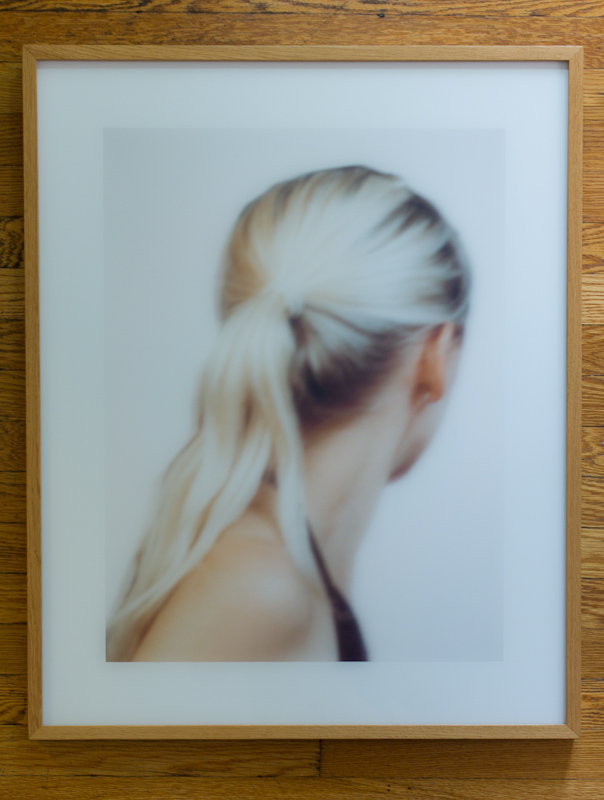 During the following days I contacted the seller of that image. I was not interested in this small print that came with a high edition number. My interest was to buy a larger print from a smaller edition. As far as I remember three sizes existed. A small size with numbers around 100, which were offered on Ebay. A medium size 24×30″ print in an edition of just five prints, and a much larger print size which would not fit any standard Cambridge apartment. I went for the medium size. I had the option to select from various images of that series but stayed with the one that I first saw. To me it was the strongest in that set. This was an exiting moment. I bought a print from someone I didn’t know and who was a student just because I liked the work. Actually it sounded more reasonable to me than buying something from someone established. It is affordable and if the career doesn’t start you will still like the photograph. Weeks later a box arrived and inside was the wonderfully framed, signed print with a personal note from In Sook Kim. Beautiful. 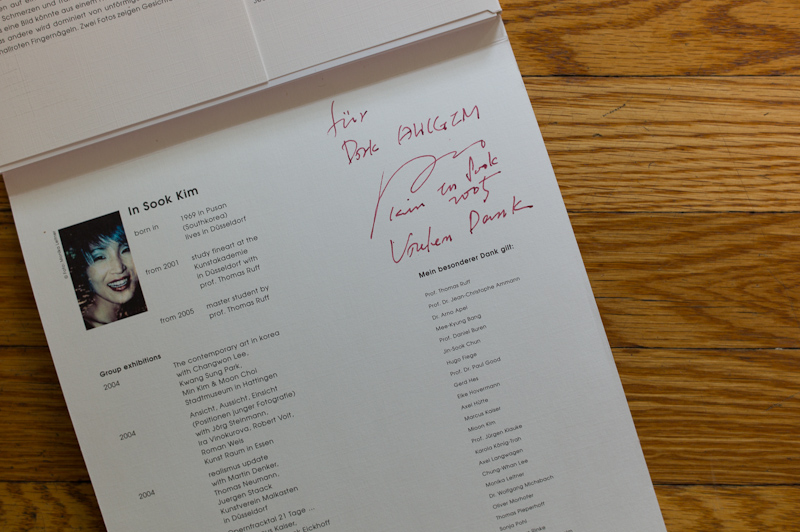 Not sure if it was her first image ever sold to the US. It could be. Since then its been hanging in our dining room and we are enjoying it every day.

Half a year later the German Vogue printed a story on her with our print being part of it. In the coming years In Sook Kim took part in group collections around the globe, from Italy to New York, Chicago to Mexico City, from South Korea to London, followed by selected solo exhibitions In Cologne, Paris, and Seoul. Surprisingly her work has changed. Now it is even more aligned with my fascination for architecture and people. Her early work were portraits of women, her focus on women’s view in our culture, their emotions, fantasies. In her newer work “Inside out” she highlights stories from the inside of buildings, which become visible through the nature of the architecture and the style of her photography. While artists like Gursky captured actual scenes in images like Montparnasse, In Sook Kim meticulously arranges her settings. ‘Saturday Night’ was her first image that I noted that was going in that direction. 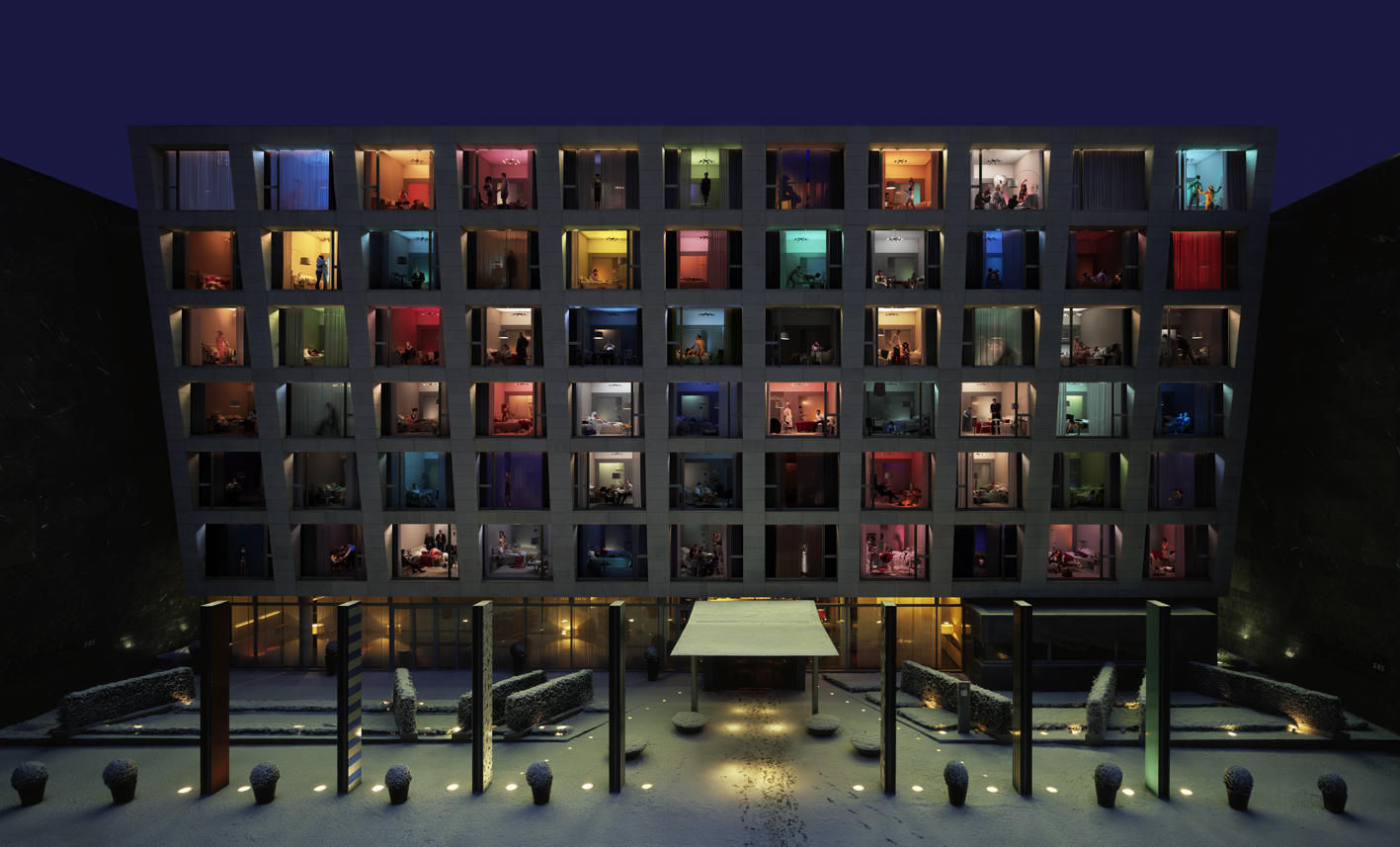 Each room captures an individual story (For Saturday Night each story came from individual newspaper articles), supported by saturated lighting. It gives the viewer a voyeuristic perspective into moments of privacy. It took her years in preproduction time and around $400k in production cost. Since then she has created an iconic body of work, exploring new themes and photographic territories. I am curious on her work illustrating the use of drugs. In 2009 I discovered a set of architectural photography by In Sook Kim in the New York Times magazine and recently she showed her work at the Ilwoo exhibition space in Seoul/ South Korea. 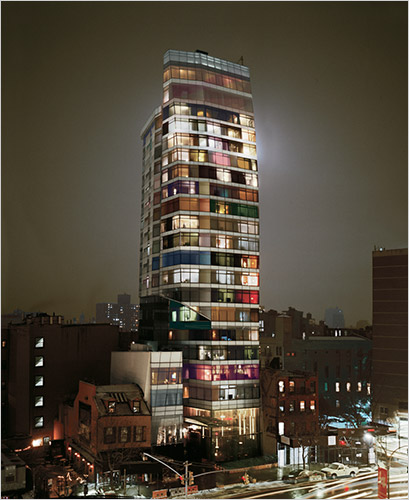 Have a look at this video link. It doesn’t have sound but it shows you an overview of her work. You may notice the photograph that I bought in 2005 hanging in the first room. Exciting to see where her career will take her next. My prediction is ‘Up’.

Surprisingly the purchase of this photo has been my last purchase of any photographic image since 2005.

2 Responses to “Following In Sook Kim”